Flash and the Pan

Henry Vanda and George Young were big names in the Australian music industry from the 1960s on. They first came to prominence with the most successful Australian group of the decade -- the Easybeats (the Bee Gees were more successful internationally, but the Easybeats were the bigger stars down under), who broke through with an international hit of "Friday on my Mind," written by them.

Then they went into record production and songwriting. Young helped his younger brothers Angus and Malcolm into the record business, where they recorded as AC/DC.

In the late 70s, between projects, Vanda and Young decided to start putting out albums again. Instead of using "The Easybeats" or even their own names, they named themselves "Flash and the Pan."

The name, of course, was a pun on "Flash in the Pan," and a lot of people thought that might be their name at first. An album was put out; it was marketed in the US, at least with a striking Hypgnosis cover showing a bunch of people sitting in the sun on the beach with a bunch of frisbees flying around them.

And, oh yes, a nuclear mushroom cloud in the background. 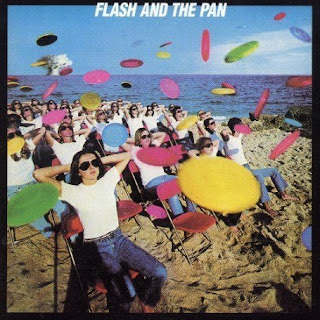 The image fit. Flash in the Pan played a kind of apocalyptic rock music, dealing with death and destruction, often on a large scale. The album included the dark "California," dealing with an accidental nuclear war ("He pushed the wrong button and soon there'll be no place called California"). "Down Among the Dead Men" was about the Titanic, while "Walking in the Rain" is about depression. The songs were always in a minor key, but what really made them sound different were George Young's* lead vocals, which were spoken rather than sung and sounded like they were coming from the speakers of an old radio. Vanda** sang the choruses and it worked as a counterpoint.

The group had one successful single: "Hey St. Peter." It got airplay on MTV due to a nicely goofy video that made the catchy tune seem less bleak than it was, but wasn't a real hit.

In 1980, the group was back with their second album, Lights in the Night. It also had a great cover. 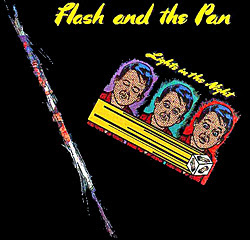 It looks like a black cover with that odd logo of the cube flying past the three faces. But note the scratch across it. It revealed the cover of the first album underneath, something that you could see on the original LP, though isn't obvious on CDs. There were further scratches on the back, showing the back of the first LP. It was as though someone had taken the first cover and painted it over with thin black paint, and if you looked closely enough, it was all there.

Once again, the songs were superb. "Media Man" was about an amoral reporter (much like Don Henley's "Dirty Laundry" a few years later). "Restless" was about insomnia. "Welcome to the Universe" -- a great upbeat tune -- says that life is a circus, while "Make Your Own Cross" sings about how people search out their own suffering. "Lights in the Night" is about UFOs, and "Atlantis Calling" is a wistful look at another disaster ("On behalf of unknown heroes/For heroes there must be/In any land that crumbles/And sinks beneath the sea").

The album sold even worse than the first.

It really didn't matter too much to Vanda and Young; since this was just a side project. They put out a few more albums after this, but they had absolutely no impact whatsoever. Even I -- a major fan -- never realized they were out until I checked the Allmusic Guide.

They probably were too much a niche to ever be popular, even if Vanda and Young had worked to make them so (as far as I know, they never bothered to tour). But it was a strange and wonderful musical direction while it lasted.

*At least, I think it's Young. The credits are unclear. **Unless it was Young.

Posted by Chuck Rothman at 7:13 PM

Flash and the Pan was all kinds of awesomeness. When I was in high school in San Diego during the 80's, our local college-rock station 91X would play "Hey, St. Peter" all the time.

Love the video too. St. Peter must have been a method actor!

One of those rare bands that I liked all their music on all their albums. Second only to Pink Floyd.

A great side project. What was their main one?
Wendell

I'm listening to a collection of their songs right this moment. I've loved their sound and only recently discovered their song "Ayla". Lovely rhythms/beat and dancing now with my 3 year old granddaughter.
I loved the way they were by this time primarily music producers and worked with some really good musicians who were happy to give a hand when they wanted to produce work of their own.
So they could do stuff when they wanted to without the burden of touring or being "pop" stars

Flash and the Pan had absolutely no marketing behind them. I was -- still am -- a huge fan and I never knew "Headlines" (released in 1982) existed until five or so years ago.

Much as I love the great songs "Atlantis Calling," "Down Among the Dead Men," "Downtown Too Long," "Midnight Man," "Media Man," and "Saviour Man," this is probably my favorite Flash and the Pan song, even though (or "because of," I'm not sure which) it sounds absolutely nothing like anything else. It's sentimental, it's earnest, it's wistful, it's even romantic: https://www.youtube.com/watch?v=kQ335XJU_9g