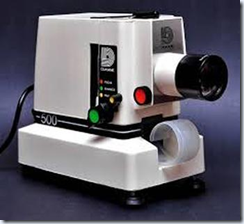 Technology marches on and new technologies supplant the old. Often, the new version is clearly superior, but that doesn’t mean you can’t remember the old technology fondly.  And for me, that is the filmstrip.

In the 50s and 60s, they were ubiquitous in public schools, the only way to easily use multimedia in the classroom. A couple of times a month, the teacher would bring out the filmstrip projector and a phonograph (optional) and we’d be treated to a show. 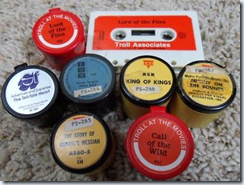 The filmstrip was a single strip of film that came in a little canister. You’d pull the film out of the canister and put it in a holder on the projector, then thread it through.

Once set, you were treated to a presentation. Each image was advanced manually, sort of a precursor to PowerPoint.

The design was clever. After being shown, the film was put into a little holder, threaded so that the first slide stayed the first slide when you were done.  No rewinding!  Some units even allowed you to fit the canister into the holder, so everything was ready for the next show.

Some of the strips had audio accompaniment.  It started out on records, that would give the narration to the slide, and then beep.  That was the signal for the operator to advance the image.

Of course, it was a high honor for the teacher to ask you to advance the film after each beep.*

As time passed, the technology advanced.  By the 70s, audio cassettes replaced the records.** Eventually, auto-advance  was added, probably disappointing the folks in the AV Club.

Of course, once videocassettes came along, they rapidly supplanted filmstrips. Now you could easily see moving images.  Filmstrips and their projectors became antiques by the 1990s.

And that was certainly an improvement.*** But they remain a fond memory for anyone who went to school in that era.

**Or did if the school had the budget for it.

***Though, since filmstrips were done by professionals, they didn’t fall into the same pitfalls as PowerPoint. 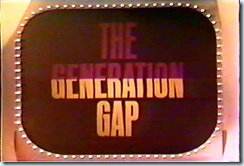 (1969)
Executive Produder
David Melnick*
Hosted by Dennis Wholey, Jack Barry
Wikipedia Entry
In 1969, there was much talk about the generation gap, so I suppose it isn’t surprising that it was the bases for a game show.
The concept was simple. You had two teams of three adults and three under-30s. The host would ask one team questions that would be well known to the people of the other team and see if they could answer. The other team would guess if the answering team would guest correctly.
So the younger generation would be asked questions about such things as big band music, while the older generation would be asked about such things as current fashion.  It wasn’t just asking questions: most of the them were demonstrated on stage, often, in the case of musical acts and personalities, by the people involved.*
I watched it regularly when it first came out. It turned out I was better at answering the question about the older generation than my own, but I always was a student of history.
One of the more memorable moments was when one of the younger people were given an old-fashioned “knife” can opener and asked to open a can.  In the time allowed, she could only figure out which end she was supposed to use.
The show was unusual in that it switched hosts in the middle of the run. Dennis Wholey was replaced with no explanation by Jack Barry. At the time, Barry had been off the air for a decade due to the quiz show scandals; his shows were in the middle of it all.  Barry worked hard at cleaning up his reputation, and his stint in Generation Gap was his first work as a host since the scandal.  He then moved on to host several other shows.
Generation Gap ran for 16 episodes before being killed by terrible ratings. I wish it could have gone on longer.
________________________________________________________
*I remember Pinky Lee was on it. He should have been way before my time, a big children’s entertainer whose career ended 1955 after he collapsed on stage.  But a local TV station syndicated a new show of his in the 60s, so I was familiar with him. 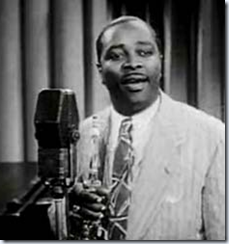 I may have mentioned this before, but I’m a fan of the blues. And of course, that mean I was a fan of B.B. King. So one day, when I saw a CD in a bookstore titled Let the Good Times Roll: The Music of Louis Jordan, I picked it up, and immediately added Jordan to my favorites.*

Jordan was born in Arkansas in 1908 and grew up to be a musician, performing in various local bands until he got his big break in 1936, when he was hired primarily as a saxophone player for the Savoy Ballroom Orchestra. He quickly showed off his talent for singing and showmanship, overshadowing the band’s nominal leader.**  In 1938, he started out on his own.

He started recording songs in 1939, a combination of new songs and covers.In 1942, he had his first R&B chart hit, “I’m Gonna Leave You on the Outskirts of Town.” It was a breakthrough. The next year was a big one.  His cover of “Ration Blues” was #1 on the R&B chart and crossed over to the pop chart (and C&W). The hits continued the next year with “G.I. Jive” and “Is You Is or Is You Ain’t My Baby?” and by 1946 he was a regular on the R&B and pop charts, with songs like “Caldonia,” “Choo Choo Ch’Boogie,” and “Jack, You’re Dead.”

In 1949, he recorded “Saturday Night Fish Fry,” which is often cited as one of the first rock ‘n roll records, partly because the chorus include the lines “And it was rockin’”

Over his career, Jordan had 18 Number one R&B hits, a record beaten only by Stevie Wonder and Aretha Franklin.

Jordan’s style is usually described as “jump blues,” and consisted of catchy tunes and tons of energy. At a time when music was segregated, he managed to cross over and sell to white audiences. He was often called “King of the Jukebox” during his time; you want wanted something to dance to, Jordan was the man you’d choose. Jordan also made short films of him performing as a way to boost his image.

By the mid-50s, Jordan suffered a loss in popularity, though he still continued to record, often reworking early songs to fit better into the modern styles. He stopped getting a chance to record in the 60s and died in 1974.

Jordan was recognized as a pioneer by musicians and was even honored with a Broadway Show. Five Guys Named Moe ran over a year and has spawned revivals over the years. And he was inducted into the Rock and Roll Hall of Fame in 1987.

**He often sang with Ella Fitzgerald.

Posted by Chuck Rothman at 7:25 PM No comments: