(1942)
Written and Directed by Orson Welles
Starring Joseph Cotton, Dolores Costello, Tim Holt, Anne Baxter, Agnes Moorehead, Ray Collins, Don Dillaway
IMDB Entry
Orson Welles’s entry into filmmaking was spectacular: Citizen Kane still is at the top of lists of the best film of all time, and, despite the efforts of William Randolph Hurst to quash it*, the film did make a small profit. Welles had signed a two-picture deal, and he went to work on his next film, The Magnificent Ambersons.

It starts in the late 19th century, where a young Eugene Morgan (Joseph Cotton) is courting Isabel Amberson (Dolores Costello). The Ambersons are atop the town’s social pyramid, and when Eugene does something that embarrasses Isabel, she impulsively accepts the proposal from the bland Wilbur Minafer (Don Dillaway). Eugene, heartbroken, leaves town. Wilbur and Isabel have a son, George (Tim Holt) who grows up spoiled and used to getting his own way, since he is, after all, an Amberson.  But when George returns from college, he finds that Eugene, now a widower with a daughter Lucy (Anne Baxter), is back in town. George takes an instant liking to Lucy, and an instant dislike to Eugene, which is exacerbated when it becomes clear that sparks are flying between him and Isabel. When George’s father dies, the long-ago romance is rekindled, and George won’t stand for it.

The movie is a classic tragedy, where George’s hubris leads to his downfall (or comeuppance, and the movie calls it). Holt manages the transition from a spoiled brat to a man to be pitied effortlessly. Cotton is the soothing presence that was his hallmark.

The revelation of the film, though, is Agnes Moorehead** as George’s Aunt Fanny. She is great in every scene she is in:  intense, sad, and with eyes full of emotion. Moorhead was one of the best actresses in Hollywood, but he was rarely given roles to showcase her talent because she was not “Hollywood beautiful.” This was clearly a role that gave her a chance to show how good she could be.

Welles finished the film and then made a fatal error: he went down to South America to film another movie, letting the studio to do the final edits.

The studio hated the film. The original ending was downbeat and tested badly with audiences.***  The studio took the film, cut 40 minutes, and added a happier ending.  Welles had given up his right of a final cut, and was not consulted at all; indeed, it seems they actively ignored any attempts by Welles to even make suggestions.  The footage has been lost.

I can see how it hurt the film:  the ending now seems pretty tacked on. Though, to be fair, as a business decision, it’s hard to fault it: a tragedy was not going to be a success given the mood of the time. Ultimately, it flopped anyway.

Even with the tampering, much of Welles’s vision remains, and the movie shows a master filmmaker in action.
____________________________________________________________
*Hearst wasn’t bothered by the connection between and him and Kane as much as he was upset by the portrayal of Susan Alexander Kane. There were enough parallels to that story to make people believe that Susan was based on Hearst’s Mistress Marion Davies. Davies was a talented actress (if anything, her connection with Hearst hurt her career) while Susan was untalented. Hearst feared – quite rightly as it turned out – that the portrayal would make people think Davies had no talent, too.
**At the time I saw the film, I only knew her as Samantha’s mother Endora in Bewitched. The credits for the sitcom indicated that she was some sort of star (her credit line not only named her character, but filled up the entire screen), but I didn’t know why.
***It tested just after Pearl Harbor to an audience of a teen comedy, so no one liked the downbeat ending.
Posted by Chuck Rothman at 3:54 PM 1 comment: 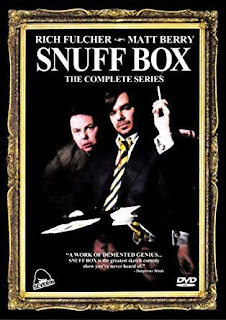 The show was not a big success. Its raunchy language had it programmed late in the evening to indifferent ratings. Only six episodes were aired and a second season was never ordered.  Eventually, though, word of mouth brought forth a DVD release, and it is available on a couple of streaming services now.
Posted by Chuck Rothman at 3:54 PM No comments: 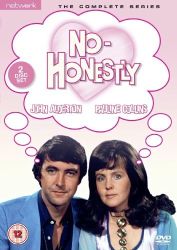 (1974-75)
Written by Charlotte Bingham & Terence Brady
Starring John Alderton, Pauline Collins
IMDB Entry
Back in the early 70s, PBS* would fill their Saturday evenings with UK Sitcoms. Some, like Fawlty Towers, were classic. Others, like Are You Being Served were extremely popular (for some reason). But others were forgotten. No, Honestly is one of the good ones, and is definitely forgotten.
It’s basically the history of the romance and marriage of Charles “C.D.” Danby (John Alderton) and his wife Clara (Pauline Collins). Each show would begin with the two of them addressing the audience, introducing themselves and various incidents in their relationship in their earlier years.** Then, we’d be shown the incident in a long flashback, before returning to the older version of themselves to wrap up the show.
C.D. was an aspiring actor with a quick wit and a clear affection for Clara almost at their first meeting.***  Clara was a little bit ditzy, with a tendency to say things that seemed like nonsense until she explained it.
The pair was very reminiscent of Burns and Allen, though without the Vaudeville trappings.  Alderton did have some of Burns’s dry humor and Collins was a more grounded version of Gracie. The show acknowledged the debt by having Alderson end the show by saying “Say goodnight, Clara.”
The stories involved issues of the usual bumps in a relationship. A favorite of mine was when he went to meet Clara’s parents after discovering he was a Lord. He was terribly intimidated by the imposing figure but did manage to bond a bit with the Lordship’s gardener. Of course, the imposing figure was the family butler, and the gardener was his Lordship himself, but the mistaken identity was handled with charm and a lack of embarrassment for embarrassment's sake.
The writing team of Charlotte Bingham & Terence Brady were married, too, which helped with the rapport between the characters. And the show’s theme song became a big hit in the UK for Lydsey De Paul.
Collin was especially charming in the role. She had previously gained notice in Upstairs Downstairs and has continued acting, most notably in the movie version of the play Shirley Valentine, which got her an Oscar nomination.
Alderton also was on Upstairs, Downstairs and continued working in British TV afterwards. The show was a lovely portrayal of what a marriage should look like.
_________________________________________________________
*At least in my area
**C.J. and Clara were portrayed as being married ten years when they started talking about the early days.
***Alderton and Collins were married – they still are – so a lot of the affection was real.