(2006) Written and Directed by Sean Ellis Starring Sean Biggerstaff, Emilia Fox, Shaun Evans, Stewart Goodwin, Michael Dixon IMDB Entry I hadn't planned on writing this up so soon, but I happened to mention it on my favorite message board (The Straight Dope Message Board) and someone actually listened to me, rented the movie, and raved about it. So I figured I should write it up here. I was intrigued by the cover image (OK, I'm a male), and the description, and also went along with my daughter's "wheat rule" (if the cover of a DVD has "wheat" -- film festival awards -- it's worth renting) and picked it up. 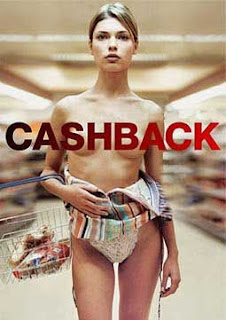 The concept is a fascinating one. Ben Willis (Sean Biggerstaff), a student at art college, breaks up with his girlfriend and goes into a massive depression, which manifests itself as complete insomnia. Wanting to do something with his extra eight hours, Ben starts working the night shift at a 24-hour grocery. But time passes too slowly, so as a coping mechanism, he imagines he brings it to a stop.

He wanders through the aisles, where everything is stopped and begins to undress and sketch the women who are frozen there.

Now, this seems like the plot for a cheap sex film, but director Sean Ellis has something else in mind. Ben is in love with the female form and his sketches all bring out the beauty of those he freezes. The images are designed for their beauty (and the concept of beauty is an important theme of the film)

He also starts building a friendship with his coworkers, all of whom have different ways of coping with the long nights. They play jokes on each other, run shopping cart races, pretend they're kung fu masters, try to create esprit de corps, or just plain try to ignore the clock altogether.

Ben starts up a relationship with Sharon Pintey (Emilia Fox), who is intrigued by the fact he is an artist. There are some nice twists. For instance, a practical joke is played on Ben which, in most comedies, would have been played as an embarrassing case of mistaken identity. In the film, Ben realizes very quickly he's been the victim of a joke, and the situation plays out in a very realistic and more affecting manner. All the characters have quirks and depths that keep surprising you.

The film has an interesting history. It was originally a short subject of 18 minutes, showing Ben stopping time in the grocery. It was then expanded into a feature, with the original 18 minutes intact. The script was written in a week, but it was several months before he could get the cast back together to shoot the new scenes. As Ellis was finishing it, he found out the original short was nominated for an Oscar (it didn't win).

The film has a lot to say about beauty and relationships and time, and is a real gem.

Posted by Chuck Rothman at 3:03 PM