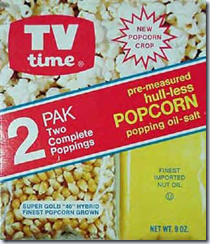 Posted by Chuck Rothman at 3:53 PM

I'd put forth the extra effort with TV time popcorn for the extra flavor ( and nostalgia ).

I sure wish tv time popcorn was available today. Growing up my family would make this every Saturday night watching Jackie Gleason. Delicious.

Obviously NOT forgotten on the least. We buy food for taste not health.

No other popcorn tastes like t.v. time. It was the best and would be again today with people steering away from microwave popcorn. Pls bring it back.

I remember melting an extra stick of butter and pouring it over our TV Time popcorn.....wow that was buttery, salty, heaven......We almost reproduced that taste with pop secret and some extra butter but it wasn't quite right.

Wish it was still available.

Every Saturday night in the 80’s with my family...they’re all gone now, and I wish I could still get this.

I wish they had the picture of the ingredient list. I know coconut oil and beta carotene were two of the main ingredients, but I can't remember the others.

I worked st TV time in bremen indiana as maintenance on the packaging machines in 1981 before they sold out to Mcormicks...always had a garbage bag with popcorn and cheddar popcorn around from the test lab...best popcorn ever to this day..

We lived in the second floor apartment at my Italian born grandmother. She was thrilled when I would make it and bring it to her. I wish I could make her a batch now.

Like everyone else lots of good memories and it was the best popcorn around. Please bring it back

We used to have this popcorn all the time in the 70’s...wish we could still get it

Agree 1,000,000% ! TV TIME POPCORN WAS THE BEST ! HAD THE BEST TASTE & BEST SMELL ! Microwave Popcorn doesn't even come close. Jiffy Pop always just popped a little then burnt. It never did work as stated on directions.

I loved TV Time popcorn and wish I could buy some now to share with my grandchildren. Best popcorn and great memories!

If you search Amazon.com for 'Great Western Premium America Dual Pack', you may find it available. (A search conducted at the time of this posting was successful.) One would have to order a large quantity (e.g., 48-count case), but it can be attained.

Not having sampled the Great Western popcorn, I cannot attest to its flavor.

A recently passed uncle of mine worked as a food scientist at TV Time in Bremen, Indiana for years. He would often present my immediate family with free samples at family reunions. The idea of ordering some in his honor, as well as to (hopefully) enjoy, is tempting.

My Grandmother would pop this every Saturday night and we would all watch Ed Sullivan show. What these memories bring back.

I think the semi-solid popping oil was palm kernel oil?