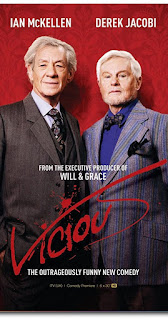 (2013-2016)
Created by Mark Ravenhill, Gary Janetti
Written by Gary Janetti
Starring Ian McKellen, Derek Jacobi, Frances de la Tour, Iwan Rheon, Marcia Warren, Philip Voss
IMDB Entry
Overacting is an art. It’s hard to know the exact way to walk the tightrope so you’re producing just the right amount of hamminess that’s funny without being obnoxious. And one of the best examples of this was Vicious.

Freddy Thornhill (Ian McKellen) and Stuart Bixby (Derek Jacobi) are gay flatmates, living together for 48 years.* Freddy is an actor who made a living at it, but who never had a notable role.** Stuart is a former bartender and their relationship has settled in to their constantly sniping and insulting each other, though it’s clear that there’s some underlying affection. The friend Violet (Frances de la Tour) drops in, but things change when Ash Weston (Iwan Rheon) takes the flat upstairs. Ash is young and handsome and straight (and a little oblivious). At first, Freddy and Stuart are attracted to him, but they back off quickly and become friends. Rounding out the cast are Penelope (Marcia Warren), whose memory is not what it used to be, and Mason (Philip Voss), a friend who sees some of the egotism of the other two. 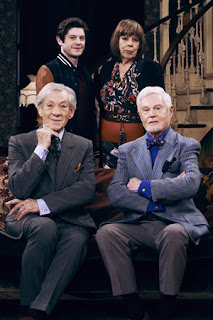 The writing of the show is merely OK, but watching McKellen and Jacobi and the rest deliver them with just the right amount of theatrical bombast. Much like Oscar Jaffee in Twentieth Century, the two of them bicker and manage to wring every bit of humor from every line.

Frances de la Tour may not be as well known as the two main leads, but she is a very successful stage actress and won several Olivier Awards and a Tony. Her film and TV appearances are usually smaller roles.*** I remember her for her turn with Robert Hoskins in Flickers.

I first saw Iwan Rheon in Misfits, where he was part of the original cast. He later gained prominence as Ramsay Bolton in Game of Thrones.

The series ran two seasons for a total of 14 episodes, with an additional series finale. Given the prominence of the actors, who were busy doing other things, too, it’s not surprising it didn’t continue longer, but the show was always filled with funny lines.

Posted by Chuck Rothman at 6:59 PM No comments: