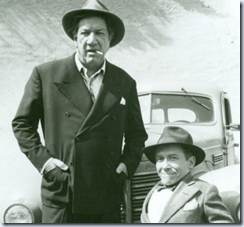 I’ve written before on my feelings for made-for-TV movies of the 70s:  most were pretty dismal affairs.  Well, since this blog is called “Great but Forgotten,” it’s also my pleasure to point out the ones that prove me wrong. Goodnight, My Love shows that the form could come up with some gems.

The film is set in the film noir world of the 1940s, and starts out with a man being murdered.  Then we discover private eye Francis Hogan (Richard Boone) and and his partner Arthur Boyle (Michael Dunn) broke and desperate for clients.  A beautiful dame, Susan Lakely (Barbara Bain) comes in and hires them to find her boyfriend.  They take on the job, and it leads to the gang leader Julius Limeway (Victor Buono), who tells them the scram.  But it turns out that Lakely has not been entirely honest with them.

Peter Hyams wrote and directed.  At the time, Barry Diller of ABC gave many directors their first breaks, and he greenlit this Raymond Chandler pastiche about a world weary private eye and dwarf partner.  The dialog has just the right amount of cynicism and the same worldview as Chandler.*

The cast is perfect.  Richard Boone is perfect in this sort of role:  gruff and hangdog.  I’ve always been a fan of Michael Dunn, and, as usual, he was great.  Barbara Bain makes an excellent femme fatale, and, of course, Buono’s trademark was the sinister Sydney Greenstreetesque fat man.**

My favorite moment is something that I’ve remembered vividly since it came out.  Boyle drives the car, set up with a booster seat and blocks on the pedals. He leaves it with valet parking, and the valet has to figure how to squeeze himself into the seat.  It’s understated and hilarious.

One of the most interesting things is a lack of a backing track.  Except for scenes in Limeway’s club, there is no music.  It’s an interesting idea, and makes the action more subdued.

The movie got some very good reviews, but like all made-for-TV movies, it’s been forgotten.  It did start Peter Hyams’s career; he went on the direct Capricorn One, Outland, Narrow Margin, and Timecop.

**Don’t judge him by Batman. 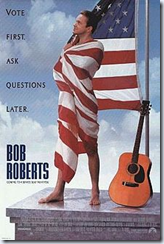 Political movies in the US are relatively tame. Usually, they are wrapped in the flag, or move away from the reality into a safe alternate situation. Bob Roberts is nothing of that, and ends up being provocative, frightening, and (hopefully not) prophetic.

Roberts (Tim Robbins) is a right-wing would-be politician, who was both a successful businessman and a singer-songwriter, a conservative Bob Dylan.*  He enters the Pennsylvania senate race against liberal Brickley Paste (Gore Vidal) and the movie is a mockumentary following the campaign.  Roberts puts forth a clean image, but Bugs Raplin (Giancardo Esposito) starts to sense something is wrong.

Robbins wrote, directed, starred, and wrote the songs for the movie.  He comes across as bland, but something about him is too slick, and the character never seems as good as he looks.  He also deals with subtle moments; the most chilling portion of the film is a single shot of him tapping his foot.

The movie was well regarded at the time, but has slowly been forgotten.

Through Time and Space with Ferdinand Fegoot (book) 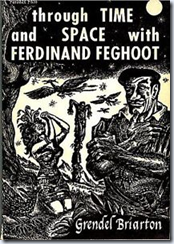 Ah, Ferdinand Feghoot.  Traveler through space and time*and always ready to show up in any situation and crack the world’s worst puns.  He even gave his name to the literary form: the feghoot.

It began in The Magazine of Fantasy and Science Fiction.  Grendel Briarton’s** first effort immediately set the stage when, when Feghoot was captured by a shaggy alien with a hand on its head and holding a hypodermic needle.  But Feghoot wasn’t fazed:  he recognized the creature for what it was:  a furry with a syringe on top.

And it continued for years and over 120 variations, all capable of eliciting appreciative groans from any audience.  There were only two rules:  You couldn’t use made up names, and you had to keep it as short as possible.

The first time I encountered one was in an issue of Venture Science Fiction, *** who’s Feghoot told of a Paris landlord who jumped in the river and refused to come out because he didn’t have enough rents to come in out of the Seine.

The concept took off.  George Scithers, editor of Isaac Asimov’s Science Fiction Magazine, helped keep it going with other authors. Asimov himself wrote several, including the brilliant “Death of a Foy.”****

But, if Briarton hadn’t actually invented the genre, he certainly popularized it. The originals are still brilliant puns, if some of the references are a bit dated.

And remember:  a gritty pearl is Michael, L.Ld.

***A short-lived sister publication of F&SF.  It published a full-length novel in every issue, but only lasted a short time in each of its two separate runs.  For many years afterwards, though, the masthead of F&SF had a line “including Venture Science Fiction.”

****Scithers turned it down for Asimov’s, probably because it broke rule number 1.  But if you’re Isaac Asimov, you can break rules.

Posted by Chuck Rothman at 2:31 PM No comments:

Writing comic panels is a different art than writing comic strips, and few people are successful at both.  Charles Barsotti was a long-time New Yorker cartoonist who tried several times to launch a strip, but never had much success.  But one of his failures was a delightful strip named Sally Bananas.

There wasn’t much to the strip.  Sally was pretty much the only character, a hippyish young woman who lived in the park.  The story was told in Barsotti’s trademark art – simple lines and curves.  Sally would talk about the world around her.

I remember the strip very fondly for one particular strip that still brings a chuckle.

Panel 1
Sally (upon meeting a strange looking creature):  “What are you?”
Creature:  “I’m a Roovil”

Panel 3
Sally:  “You eat money?”
Roovil: “Sure.  Haven’t you heard that money is the eat of all Roovils?”

I love puns, but what sells the strip is the final panel.

The strip only ran three years.  Issues with the comic syndicate didn’t help, and it was probably too whimsical for a mass audience.  Barsotti returned to the New Yorker and continued his successful career until his death in 2014.