Like most kids growing up in the 50s and 60s, I was addicted to television.  But in the early days, we only had two stations --  CBS and ABC – so our options were limited.  For many years, that meant the only thing on when we got home from school were game shows.  And one that was my favorite was Music Bingo*.

The show’s board was a Bingo card, with the letters “M-U-S-I-C” at the top.  Two contestants would listen as the band would play a song.  The first to answer correctly, got to place their symbol – a sharp or a flat – on the board.  Five in a row, and you won the game.  Here is the opening:

The host was the first network gig for game show legend Johnny Gilbert, best known today for “This  . . . is Jeopardy,” which he has been doing since the show was revived with Alex Trebek.**

Something about the show fascinated me.  I rarely knew the songs (at eight, my music knowledge was limited), but I enjoyed the challenge.

What really stuck in my mind was one of the champions.  I don’t recall his name, but he was always introduced as the father of quadruplets, a term I had never heard before.  What I also remember was that remained as champion forever.  I actually stopped watching for several months and the same guy was still champion the next time I watched.  I often wonder if that had anything to do with the rules that limited the number of times you could win.

I moved on, and the next time I checked, it was gone.  There’s very little information on it online, but it was a favorite of mine.

Posted by Chuck Rothman at 4:27 PM No comments:

In memory of Peter O'Toole

My earlier comments on The Stunt Man, one of his best roles.
Posted by Chuck Rothman at 12:41 PM No comments: 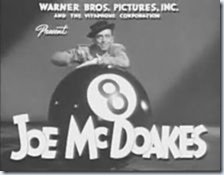 Moviegoing in the 1930s was far different than it was today.  Most theaters had only a single show of a single movie.*  There would be more than just the film though – a cartoon, a newsreel, previews of coming attractions** and, of course, live action short subjects.  Joe McDoakes was one of the last and the best of these.

The series was a creation of Richard L. Bare, who wrote and directed the entire series.  Bare was a graduate of the USC film school and taught film courses there when he came up with the idea of working with his students on a class project.  Finding out-of-work actor George O’Hanlon, he produced a ten-minute short subject entitled So You Want to Give up Smoking.  After the project was done, he took the completed film – as Richard L. Bare Productions – to Warner Brothers, who purchased it and asked for more.***

And thus the series was born.  It followed Joe McDoakes (O’Hanlon), and average guy who would try one thing or another, only to run into strange complications.  Each episode began with So You Want to…., as Joe tried such things as going on vacation, being a salesman, throwing a party, getting rich quick, or play the piano.  Of course, things would go wrong is bizarre and wacky ways.

O’Hanlon made a nice McDoakes, perpetually forced into odd situations and meeting absurdist characters.  Art Gilmore narrated the shorts, setting up the scene and helping with the wrap-up.  Several actresses played Joe’s wife; the best known was Phyllis (“Lois Lane”) Coates. The series’s opening – with Joe coming out from behind a giant eight ball – was memorable.

The films only ran about ten minutes, but were filled with laughs.
Bare wrote and directed, with O’Hanlon helped with the writing, too. They were cheap to produce, and were the only live action comedies of that length, which allowed theater owners to throw in something short and cheap.

Richard L. Bare moved over to TV when McDoakes ended, working on shows like Broken Arrow, 77 Sunset Strip, Maverick, Cheyenne, The Twilight Zone and others, but his best-known gig was with Green Acres, where he directed every episode.  You can see the similarities between that and Joe McDoakes – the same wild characters and anything for a laugh sensibility.

O’Hanlon also became a TV icon, even if his face was unfamiliar:  he was the voice of George Jetson.  Even Art Gilmore had a long career in TV as the narrator of quite a few shows, including Red Skelton, The Waltons, and Highway Patrol, as well as being an all-purpose actor in a couple of Jack Webb series.

***He first checked with the college administration, who okayed the contract.

Posted by Chuck Rothman at 9:34 PM No comments:

”One hit wonder” is a cruel term, covering novelty acts (Napoleon XIV), groups outside the top 40 mainstream (The Grateful Dead), bands who put out an excellent single but couldn’t follow up (John Fred and His Playboy Band), and terrible groups who got one lucky break (Steam). The Youngbloods are technical a one-hit wonder, but the hit didn’t really define their sound, and who produced excellent music without hitting the single charts.

The group was led by Jesse Colin Young (birth name: Perry Miller). He grew up in New York and began playing folk music in Greenwich Village coffeehouses.  Young was noticed, and released two solo albums.  After the second, he started working with guitarist Jerry Corbitt, billed as Jesse Colin Young and the Youngbloods.  The two settled in southern California and took up two new members, Banana (real name: Lowell Levinger) and Joe Bauer.  The group followed in the footsteps of The Lovin’ Spoonful, and released their most famous song off The Youngbloods, their first album:  “Get Together,”* a paean to peace and love.

The album did have some critical acclaim, however, and a second album, Earth Music, was released.  It didn’t even chart, though, again, it was a critical success.

At this point, Corbitt left.  The group looked like any one of a thousand critically acclaimed acts that just couldn’t find success.

But the Youngbloods kept going. The group carried on as a trio, with Banana’s electric piano becoming more of a lead instrument.  Then, in 1969, they got a break.

The great New York City DJ, Dan Ingram, was putting together a public service announcement promoting brotherhood and chose “Get Together” as the background music.  WABC was the top-rated station in New York at the time, and people noticed the song, including the National Council of Christians and Jews, which used it as the theme for their TV ads.  The two-year-old song reached #5 and is still a mainstay on classic rock station.

At the same time, they released the masterpiece Elephant Mountain.

The album starts out with a bang:  the apocalyptical “Darkness, Darkness.”

After this beginning the album switches gears many times, to the pop breakup song (“Smug”), to jazzy improvisations (“On Sir Francis Drake”), to love songs (“Sunlight”), folk/music hall hybrids (“Rain Song”), and much else.  The group, which had previously did a lot of cover versions,  wrote all the music themselves.** It was a truly wonderful album.

It sold poorly, coming up just short of the top 100.  Of course, their big hit wasn’t on the album, and it may have been too eclectic to be massively popular.

The group also did something unheard of:  they walked off the Tonight Show.  They had been asked to perform “Get Together,” but were reluctant to perform something they had recorded two years before.  They agreed to do it if they could also perform “Darkness, Darkness.”  Johnny Carson agreed, but when the show ran long and they were told to only perform their hit, they left.

Instead of coming out with a strong followup, the group’s next release was Rock Festival, a live album of all original material that was a big disappointment, though it was the only one of their albums to crack the hot 100.

Realizing their mistake, their next album*** was also live – but Ride the Wind took some of their better studio songs on stage, and gave casual fans a live version of “Get Together.”

Good and Dusty had them doing more cover songs, mostly blues covers, but it really didn’t please anyone.

High on a Ridge Top was also all cover songs, but to better effect.  It was an eclectic mix – Dylan, the Beatles (“She Came in Through the Bathroom Window” is a real delight), Taj Mahal, plus several 50s hits.  Not a great album, but an enjoyable one.

At that point, Young decided to go solo.****  While he never had a hit, he recorded and performed regularly into the 21st century.  He reformed the Youngbloods in the 80s for a tour or two, but has been content to keep performing solo.*****  Corbitt also had a solo career.

The Youngbloods were never a major act, but at their best – especially in Elephant Mountain – they made a claim that they deserved to be.

**Except “Rain Song,” which had been cowritten by Jerry Corbitt.

****Perhaps the reason the group was doing so many covers in their last two albums was that Young was saving his own songs for his solo career.

The Secret of NIMH 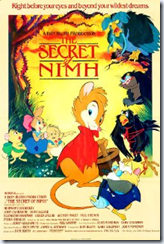 Back in the 80s, Disney had almost a monopoly on animated films, and the genre was in dire condition.  Disney was in a creative slump, the animation department releasing only three feature length films in the 1970s,* of indifferent quality.  Their first 80s film, The Fox and the Hound also unimpressive and Disney seemed content to rerelease their classics every seven years to a new audience of kids.  It was in this atmosphere that Don Bluth put together The Secret of NIMH.

Bluth had worked with Disney starting with Sleeping Beauty,  but set off on his own, getting the rights to Robert C. O’Brien’s Newberry Award winning novel Mrs. Frisby and the Rats of NIMH.**

Mrs. Brisby (voice of Elizabeth Hartman) is a widowed field mouse whose son Timothy (Ian Fried) is deathly ill and must stay in bed or die.  But the spring plowing will destroy their home.  Desperate, Mrs. Brisby consults with the rats of NIMH – highly intelligent ones who were bred at the National Institute of Mental Health – and their leader Nicodemus (Derek Jacobi).  But the rats have traitors in their midst….

The story is not plain vanilla Disney.  There is a darkness, and characters even die.  Mrs. Brisby is a strong, brave heroine.  It came out to strong critical acclaim, though did not make a great deal of money.

It was, however, a wake-up call to Disney, which began producing quality animated fare that is now considered the second golden age.  I remember seeing it and thinking, “finally the Mouse is getting some serious competition.”  And looking forward to more great films by Bluth.

Alas, it was not to be.  While Bluth did have some solid hits like An American Tail and The Land Before Time,*** the films were never as good as his first, and his All Dogs Go to Heaven and Rock-a-Doodle are just embarrassing to watch.

But The Secret of NIMH is not just the high point of Bluth’s career, it’s a classic of animation.

**They were worried the Wham-O might not like the name “Frisby” and I suspect putting “rats” in the title was considered bad marketing.

***The Land Before Time was a brilliant concept, but a dull story, with extremely muddy animation, but it did succeed.

Posted by Chuck Rothman at 10:06 PM No comments: