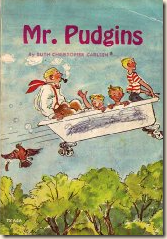 One of the great joys of going to school in the 60s was the Scholastic Book Club.  Every month or so, you'd get a list of books, all available for dirt cheap prices, even for the time -- sometimes as little as a quarter (when paperbacks were 50-75 cents).  And in among the various books I picked up was the wonderful, Mr. Pudgins, by Ruth Christoffer Carlsen.

When I read it, the book was marketed as being similar to Mary Poppins. The idea was simple.  Mr. Pudgins would come by to babysit for John, Pete, and Jane. At some point, he would sit back and smoke his pipe* and then magical things would happen.

For instance, John, Pete, and Jane would meet their mirror images who came out of the mirror to play -- and didn't want to go back.  The water faucets would have running soda, bathtubs would fly, and cars would turn into motorboats.

The stories were written in a very matter-of-fact style as the kids first were delighted by the new changes, but then discovered they weren't unmitigated successes.  It's not a book with a lot of action, but plenty of wonder.

This was the first novel for Carlsen (age 90 and living in Iowa City, IA). It took her 14 years before she published another, Henrietta Goes West, and wrote several more before disappearing (though she is still writing).

The book is hard to find, and I'm afraid the pipe smoking means it may never be reprinted.  That's a shame, since a book this wonderful deserves to be remembered.

*This was before the Surgeon General's Report.

I read Mr. Pudgins in 6th grade at Bryant School in Superior Wisconsin. Have thought about it from time to time and tonight decided to look up the book online. I was spelling it Pudkins at first but found out the correct name but a few searches about soda coming out of the faucets. Its was the 78-79 school year since I last read this great book. Wonderful memories of one of my favorite years in school.

We grew up with a baby sittter reading Mr. Pudgins. It was opur favorite! The sitter would laugh so much she refused to read only one chapter each time whe sat!

You can get a copy easily at Al Libris.

Now Mr. Pudgins would be 'banned' for his incessant smoking/second hand smoke, too much sugar in the 'soda pop faucets' and probably deemed a 'dirty old man' by wacked out radical feminists, mad that the 'sitter' is a man and not a woman. Sheesh. I have the "original" copyright 1951 in cloth-hardback, golden yellow with brown image of the Pudgins on the flying Dodo bird, smoking is pipe, the kids on the bird and one hih above on the rope. One of the best childrens books ever!! Thanks for the post and the memories.

Hi. Found your blog while I was searching for references to this book. I was in the fifth grade when I read it. All I could remember was that it featured a dodo bird, so my search term was "dodo bird children's novel." I'm grateful to find the name of it!

My all-time favorite book as a child. :D

My son and I read it over and over.
I still have the old copy of it.
Think I found it in a yard sale years ago.
Glad to know so many enjoyed it too.

Favorite book ever! I must have inherited it from an older brother. I read it a hundred times in the 70's.

This wass a favorite book when I was a boy (1960s). I searches for some years for it (pre internet) before finding it in a used bookstore so _my_ kids oculd read it... by which time, alas, only one of my daughters was young enough to truly enjoy it in innocence. But there will be grandchildren one day...

I LOVED this book too--just imagining our water faucets flowing with soda pop! Have tried to find it a few times over the years and they are going for at least $22 on Amazon up to $180 (to Joyful Catholic--you might be sitting on a gold mine there!).

My question is, Why hasn't someone made this into a movie? Forget about the smoking. Heck, Santa Claus smoked his pipe and so did Frosty! On Doctor Who's Xmas special last year, he had a lemonade faucet, and it reminded me of Mr. Pudgins. Nanny McPhee, Lemony Snicket, and every other story of fantasy has been made. This one deserves to be resurrected as well!

I still have a much-abused paperback copy of this book - cover missing, pages yellowed and dog-eared, a couple of loose pages... I first read it about 25 years ago when my mom bought it at a school book sale. It remains one of my favourite childhood books, and I can't wait to read it to my son when he's old enough. It even spawned an entire university semester of attempts to cook with pop (FYI, ginger ale turns scummy when you boil potatoes in it).

I loved this book soooo much...I read it at night all the time. Would you believe my mom got tired of me sitting and reading it that she threw it away!? Broke my heart but I still remember Mr. Pudgins as a wonderful book and happy times!!

I first read Mr. Pudgins back in the mid '60's when I purchased it at a school book fair. I still have that copy along with several others. I have given a copy to our oldest grandson who is now 13 and just this weekend I took a copy to our 6 year old grandaughter and read it to her. She just howled with laughter! Wonderful and magical book.

This was a book my Dad bought when he was a kid (he was 10 when it was first released) and passed down to me. I've grown up reading it and just yesterday handed it to my 9 yr old son for his own enjoyment. I would love to tell the author of the joy she has brought 3 generations of my family with this wonderful story.

I read incessantly as a young adult and this book just fueled the fire further. I can only hope that I will instill a sense of wonder in my nephews and nieces like Mr. Pudgin did for me.

You made a difference.

One of my faves as a child. Right up there with the hobbit and the furious flycycle and Charlie and the chocolate factory.

This was by far my favorite book growing up (I'm 49 years old now). I told my 7 year old about it yesterday and I am glad to see that I can still purchase it for him to read.

I read this book over and over when I was in grade school in Detroit. (I'm 62 now and still think of it as one of my favorites from the 60's.)

There's a kindle edition of MR. PUDGINS. The picture on the cover is missing his pipe. I ordered mine used! The original owner of my copy was a Jerry Anderson fan.