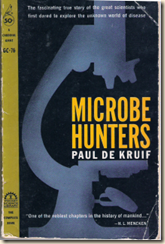 Microbe Hunters probably started more people on careers as doctors than any other. It was a massive bestseller over the years (and is still in print), and everyone who has ever read it remembers it with great pleasure.

De Kruif grew up in Michigan and got his doctorate in microbiology, but, after trying teaching, he became a writer.  His second book was Microbe Hunters, and it made him a household word.

The book is a history of the early development of our knowledge about germs and bacteria.  He chooses a dozen early scientists and tells their story.  They are (using his own chapter headings)*: 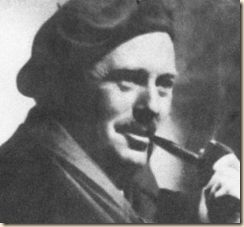 As you can see, DeKruf had a way of making all these seem like the epic battles they were.  His prose style was delightfully gushy, and it worked wonderfully in making you feel the difficulties in unraveling these mysteries.  He makes up conversations, adds his own comments, and makes it all an exciting read that you really can't put down. It reads like a novel, and you get a strong idea of how the people involved slowly learned the cause of the diseases they studied.  It's still entertaining reading today.

Some modern critics have complained about this practice, saying that making up conversations and character motivations gets away from the truth.  I disagree. They are confusing accuracy with the truth; the book may not be 100% accurate, but it is 100% truthful.

De Kruif followed this up with the lesser-known Hunger Fighters, which is nearly as good.  He continued to write about science and scientists until the early 60s.

If you like science, mysteries, or just plain good, inspiring stories, this is one of the best.

*My notes are in parentheses.

**In case you wondered why they named that Hospital in Washington DC for him.

Paul de Kruif will not be forgotten as long as I live. He shaped me into a scientist when I was 12. I am now retired.

I read this as a kid; as you say, it was quite influential. Perhaps the anti-vaccine crowd need to have copies sent to them?

I read this at 10, looked for an opportunity after that, got into a lab at 16, and have done research all my life. But it was de Kruif who pointed out by these biographies that you can make discoveries and translate them. ILW