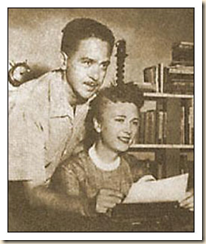 Modern science fiction started out as a short story medium. Sure there were novels, but many were just "fix-ups" of multiple stories (like Asimov's Foundation) or expansions of published stories. And back in the early days, you could make a living writing short stories for science fiction magazines, with an occasional fix-up or novel.

Henry Kuttner and C. L. Moore came out of that milieu.  He was one of the top writers of his time, and  helped stake out the horror genre after H. P. Lovecraft died.  She was a pioneer for women writers in the genre.

Even the thing that usually gets an author noticed -- making a movie of his work -- didn't help.  Despite the fact that at least five of their stories were made into movies or TV episodes, it didn't help, partly because Hollywood never did them justice.

Kuttner grew up in Los Angeles, and started writing pulp science fiction and horror in the late 1930s. He became a major fan of H. P. Lovecraft and corresponded with Lovecraft as he wrote his own horror stories. It was through this correspondence that he met C. L. Moore.

Catherine Lucille Moore had started writing horror and weird tales a few years before Kuttner.  Her "Northwest Smith" adventures were a big hit, after she had decided to use just initial in her byline so people wouldn't think she was female.* It worked pretty well, since Kuttner first thought she was male. He evidently was quickly disabused of that notion, since they married in 1940.

The two were collaborators. The not only edited each other's stories, but they also wrote them together -- one writing a section and leaving it on the typewriter for the other to add to.  Often they were never sure which person was responsible for what.

So it's hard to put a finger on Kuttner and Moore after their marriage, since a story bylined "Kuttner" would have some Moore in it and vice versa. In addition, they wrote under various pen names, most notably Lewis Padgett and Lawrence O'Donnell.  But the general belief was that Kuttner's stories were more "pulpy" whereas Moore was more "literary."

Kuttner wrote several novels, but none of any particular note. He was best known for his short works, and his most successful series was his Gallagher stories, about an inventor who came up with all sorts of strange devices -- but only when he was blind drunk. In the morning, he couldn't remember what they were for. I don't think these hold up all that well, even if you were willing to accept the un-PC-ness of the concept.

Moore wrote the Northwest Smith** series and another featuring Jiriel of Jory, one of the earliest sword and sorcery series with a female protagonist.

But their best stories -- collaborations to one degree or another -- were classics.  Some of these are:

It's hard to say which story goes to which author.  Most critics agree that "Vintage Season" was primarily Moore and I get the impression that the humorous works were primarily Kuttner. But if they can't keep it straight, how can anyone?

Kuttner died in 1958 of a heart attack.  Moore pretty much gave up writing short fiction after his death, teaching creative writing courses and also writing for TV.

Now, both authors are pretty much forgotten, and the science fiction short story is in bad shape.  But they were important pioneers in the field and helped shape science fiction, fantasy, and horror into what it is today.

*Who, after all, were too delicate and frail to write good pulp fiction, of course.  ;)

**Moore once said the name came from seeing "N.W. Smith" listed as a name.

Her "Doomsday Morning" is worth revisiting. IIRC, "Total Information Awareness" meets the computer virus. Written in '57.

Henry Kuttner's "The Dark World" is worth reading. It was an inspiration for Roger Zelazny's Amber series. They didn't just write short stories. Together they had many novels which are classics in the SF genre. Fury, Mutant, The Well of Worlds, Time Axis, Earth's Last Citadel, The Mask of Circe are all collaborations between Kuttner and Moore. I recently picked up Man Drowning which I intend to read this year. It is a noir. Some confusion about who wrote it but Henry Kuttner is listed as the author so I will accept that.

I still remember reading "The Children's Hour". when I was 14 in 1970. I was so touched by the beauty and the sadness of the story I never forgot it. In recent years I have used google to find info on the story and on the author's. Such a great era in sci fi. The 30's-50's. The name Clarissa has always touched me since then, and walks in the rain evoke memories of the story. I feel sad loss when I think of it.