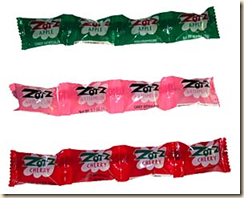 I don't think Zotz were ever all that popular; they were more of a novelty than serious candy.  But there was (and still is) no candy like them.

Zotz were basically fruit-flavored hard candy: good, but not out of the ordinary -- until you got to the center.

I first discovered them in college.  One of the other guys in the dorm had me try one.  It was early on in the joke, so they didn't think to give me one vital instruction: bite down on it.  I didn't react the way they hoped, but they later realized the issue.

You see, the center of the Zotz was baking soda.*  This doesn't sound like a particularly good ingredient for candy, but, as your high school science teacher showed you, when you mix baking soda with an acid (in this case, probably citric acid), everything fizzes.**

Which is what Zotz did.  One bite, and your mouth filled with fizziness. It was a lot of fun, even if you were in on the joke.  And I got to enjoy them a lot.

The candy seemed to have originated in Italy.  The name may have come from a book (and movie) about a professor who finds an ancient coin which gives him special powers: if he points at someone, they feel pain; if he says "zotz," they move in slow motion; and if he points and says "zotz!", they die.  It was a comedy.

In any case, Zotz still can be purchased online.  Just search for "Zotz candy" and you'll find it.  It's worth a try, just for fun.

* Perhaps it was baking powder, only I remember seeing "sodium bicarbonate" on the ingredients label.  Zotz called it "fizz powder," but no one was fooled.

** Usually.  If there was a crack in the candy, the powder leaked out and you got a sensation that some sort of liquid center was in the middle.

Posted by Chuck Rothman at 7:42 PM

Wow, great to see there are other Zotz fans on the planet.

I discovered these when i was about.. 12 back in the early 80's. They soon rose to my all time favorite hard candy.

I never thought of them as a practical joke, I guess because I was the only one who knew about them!

I just sort of though of them as being "soda" in candy form, even though the fizz part didn't happen till the end.

I'm amazed to see the can still be bought online, I think i'll have to make a purchase soon!

I just stumbled upon Zotz Candy at Top Foods grocery store last night (Seattle-area) and the memories flooded back. I bough 16 of them and have already eaten all of them this morning!

On sale for $.25 each, i'll have to grab a bunch before I forget about it again.

Im 14 and my grandma use to give us zotz when we were younger. i find them at the store alllll the time. they are soo yummy :) hehe. They are really fun to barly crack and put in a cup of coke. >:)

I buy them at the gas station by my house. I make my friends eat them when I can.

Recently, found Zotz at a convenience store in my small town. My wife and I both love these. A unique and tasty candy from mt teens. Good stuff from 80's is returning a little.

I just bought some from a convenience store in Big Sky, Montana and they are the most delicious candy I've ever had.

I forgot their name...