I have a weakness for quirky British comedies that show a group of oddball characters dealing with a situation, often featuring Irish settings. The Englishman . . . * fits right in, though it’s set in Wales.

The story is set in 1917 in the fictional town of Ffynnon Garw**, just across the border from England, and renowned for being the site of “The First Mountain in Wales.” A team of surveyors George Gerard (Ian McNiece) and Reginald Anson (Hugh Grant) show up to survey the mountain, and discover a horrifying fact: the mountain’s actual altitude was only 984 feet, 16 feet too short to be considered a mountain. It is officially a hill, so the village’s claim to fame is suddenly destroyed. Worse, without a mountain, they might as well be English. 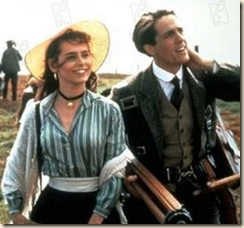 In response, the villagers, led by Morgan the Goat (Colm Meany) contrive to keep the surveyors in town until things can be set right. And, of course, a romance develops between Anson and Betty from Cardiff (Tara Fitzgerald) that complicates matters for everyone.

You can probably guess what happens from the title alone, but the story isn’t about plot twists. It’s about the community. For instance, as the narrator says in the beginning, “there is an extraordinary shortage of last names in Wales. Almost everyone seems to be a Williams, a Jones, or an Evans. To avoid widespread confusion, Welsh people often add an occupation to a name. For example, there was Williams the Petroleum, and Williams the Death. There was Jones the Bottle, and Jones the Prize Cabbage... which described his hobby and his personality. Evans the Bacon, and Evans the End of the World.” There’s also plenty of small humor in the characters’ reactions and skewed perception of the world.

The film came out fairly early in Hugh Grant’s career, his next major role after Four Weddings and a Funeral. He was still playing the charming yet bumbling and shy character that was his trademark, and is just right here.

I’ve mentioned elsewhere I’m a big fan of Tara Fitzgerald, an actress who combines beauty and a keen eye for a good role. And Colm Meany really needs to be considered alongside of Patrick Stewart when thinking of the best actor to come to prominence in Star Trek.

The film did so-so in the box office, probably saved from failure by Hugh Grant’s name. Writer/Director Monger went six years before directing another film (made in Greece) and has been doing a little TV, but has no long list of credits. I’d add him to my list of directors who I wish were given another chance.

*How the film is billed if you’re too lazy to write out the entire title.

**As others have noted, Wales is so poor that they cannot afford many vowels in their place names.

I got kinda bored with this, but I really like the idea of people trying to make their own mountain. It just seems so cute and quirky.

My cousin wrote and directed "The Englishman." I've never met him, but we've exchanged some emails. The movie was a huge revelation to me as I knew absolutely nothing about my Welsh ancestors and how they lived. A lot of people's cousins make movies, but I'm extremely lucky that my cousin's movie was about the history of the town where my Great Grandfather was born. It's a true story, BTW, only the town's name was changed to protect the innocent (maybe those with sandy coloured hair like Morgan the Goat's).

As an aspiring filmmaker I don't think that there is basically anything wrong with "The Englishman." Acting, writing, directing, cinematography, soundtrack... everything is absolutely top notch. I don't think that because I'm biased (which I am, haha!) I'm glad that you appreciate this movie as I do. You're right, it's a fine film! :)