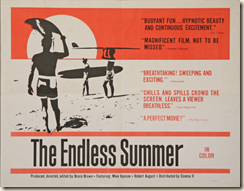 Lots of great directors had themes running through their work.  There's Hitchcock's "innocent man on the run" or Orson Welles's "lives of larger-than-life figures."  Bruce Brown had more than just a theme: he had an obsession. 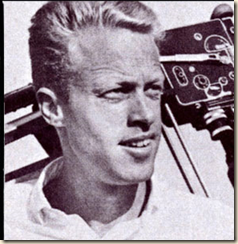 Brown directed surf documentaries. Or, rather, he showed up with his camera, edited them, added narration, and made films of the whole experience. He loved the sport.

The Endless Summer was his big splash.  The idea is simple:  Mike and Robert go on a trip around the world looking for the perfect wave, visiting Senegal, Ghana, Nigeria, South Africa, Australia, New Zealand, Tahiti, Hawaii and California.  Brown filmed their trip, their disappointments, and finally their triumph.

Of course, it shows a lot of surfing, but the footage is well chosen and never becomes dull. If the waves are no good, then there were other things to shoot.  In a way, he was a precursor to modern "follow someone around" documentaries, since he tended to keep the camera running to see what might happen.

The film is especially entertaining due to Brown's narration.  He has a nice ironic sense of humor and isn't afraid to laugh at some of the quirks of the sport.  The line "You guys really missed it.  You should have been here yesterday" shows up a lot, and always brings a smile.

The film was a big success. Brown's earlier films shows only in surfing hotbeds, but this broke through to the general public.  People who knew nothing about the sport showed up, and some even took it up.  As much as anything, it contributed to the rise of surfing over the years and the movie poster, in various forms, has become an icon.

Brown made other surfing films, and his sequel The Endless Summer II, did even better than the first. Now, however, the movie is like it was in the beginning -- known to surfers, but not the world in general.**

It's a perfect film to recall how special the summer can be -- whether you're a surfer or not.

*To get the full Bruce Brown treatment, say the word in an excited falsetto.

**This despite the fact it's been selected for the Library of Congress's film registry, an astute choice.