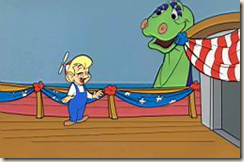 One of the most charming things about 1950s TV was its children's programming. Maybe it was the innocence of the time,* but it produced kid's shows that favored humor over violence and puns over putdowns.  Bad guys were never truly bad and good guys were always truly good.

And there was a fascination with puppets.  Nowadays, Howdy Doody is still remembered, but there was also Kukla, Fran, and Ollie, and puppeteers and ventriloquists like Shari Lewis and Paul Winchell were all very popular.*

Beany and Cecil were one of the first, starting broadcasting in 1949, and also one of the most long lived, simply because they switched to cartoon form when puppets became passe.

The characters were -- as the theme song kept singing -- created by Bob Clampett. Watching it as a kid, I had no idea who Clampett was, and wondered why it mattered.  But later, I learned why.  Clampett, along with Chuck Jones and Friz Freleng, was one of the "big three" cartoon directors at Warner Brothers.  Clampett was responsible for such classics as Porky in Wackyland, A Corny Concerto, Horton Hatches the Egg, Coal Black and de Sebben Dwarfs***, The Bashful Buzzard, and The Great Piggy Bank Robbery.  Clampett left Warners (or was fired; accounts vary) in 1946 and when TV came along, he jumped right in.

The original show with puppets was Time for Beany, and was a smash at the time.  The basic cast was set:

Beany and the Captain went on adventures, usually running into some scheme by Dishonest John.  Cecil -- your typical big, dumb lug -- would get fooled, of course, but, in the end, he'd save the day, crying out "I'm coming Beanyboy!" as he swam to the rescue.

The show was surprisingly sophisticated. There were topical and political references in among the bad puns.  Like many good children's entertainment, the writers were writing for themselves, not kids, and the humor shows it.

In many ways, the show was much like another great -- but not forgotten -- cartoon of this vintage:  Rocky and Bullwinkle.You can even see some similarities in characterizations (Beany = Rocky, Cecil = Bullwinkle, Dishonest John = Boris Badenov).  Rocky and Bullwinkle is overall better, but it owes a lot to the original.

The show also was notable by the use of the voice talents of Daws Butler and Stan Freberg.

By 1955, puppets had lost their appeal, and Time for Beany ended.  But Clampett was able to use his cartoon background to move on to the next thing in kid's shows.  In 1959, he created a half hour version of Time for Beany called simply Beany and Cecil (with different voice actors).

This is the version I remember, as part of Mattel's Funday Funnies. Clampett was hindered by bad animation, but the show kept the same sharp humor that would surprise you (like Cecil calling a bird a "Robin Redvest," and turning to the camera to say, "I'm too young to say 'redchest.'")****  I also remember Cecil singing "Ragmop" whenever he was in a good mood.

The show ran throughout the 60s, rerunning the same few episodes. It has been tremendously influential in almost the same way Rocky and Bullwinkle was; word has it that Albert Einstein was a big fan of the original puppet version. But, eventually, humorous cartoons vanished from broadcast, and Beany and Cecil vanished.

It hasn't gotten the attention of other cartoons, but was one of the bright spots of kid's TV.

*It helped that they were cheap.  Actors could play two roles at once, and you can create any set you want with just sets could be created with

**A cliche, I know, at a time when people were seriously worried about Nuclear War.

*** Not easy to find, because of how it portrays Black characters.

**** And, obviously, the censors wouldn't let him say "Robin Redbreast," either.

Posted by Chuck Rothman at 8:55 PM

I too grew up on and loved this cartoon. The puppet version was before my time, but along with Popeye Mattie's Sunday Funnies and Beanie and Cecil were the first cartoons I watched. These and the Hanna Barbera ones were so much better than anything today. I don't think that's just nostalgia on my part, I rewatched a few Beanie and Cecil episodes on YouTube and they really ARE better!

We were 7 and 9 when Time for Beany came on television giving my brother and I guaranteed fits of laughter. It was goofy and silly but actually very smart, very stylish for the era. Even at our young age we knew the scripts and voices were pure genius but didn't know that word. I am so grateful the films were saved and now online, once again giving me fits of laughter and a few tears for the poignancy of it, the pure innocent fun that is now so hard to find.

I got the talking Cecil stuffed animal for Christmas one year. Yeah, elves made it. Anyway it was really cool till me and my brother accidentally broke the voice mechanism . I cried....

My grandfather, Eddie Maxwell wrote for Beany & Cecil. I used to show my friends his name in the credits. I know that's silly, but I was VERY proud of him.

I’m coming Beany Boy! I still say it and yes, I get weird looks, but it makes me smile!

I loved Cecil and Beany. I still have my talking Cecil stuffed toy although he lost his voice in 1988 when he fell off of a shelf...I cried too. Last week at a local Comic con I found a Beany doll who also doesn't talk any more. Now Cecil and Beany are together again. My granddaughters love them too!

I had a Beanie & Cecil Beanie (cap) with a spinning propeller...it was my favorite thing at the time.

I want to request the lost episodes of Beany & Cecil TV series including There's Goes a Good Squid Peking Tom & others to Youtube Channel soon.

I am the big fan of classic cartoon that's my favorite show for a long time in the Philippines during childhood years in the 1960's era in history.

I am the cartoon fanatic my favorite collection during childhood years my name is Wayne Moises from California United States.

I'm a animated cartoon & comicbook fanatic is my favorite collection my name is Wayne Moises from
California United States.

I'm a cartoon fanatic is my favorite collection in popular culture in TV films comics animation & media my name is Wayne Moises from California United States.