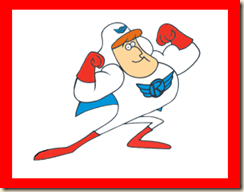 It's hard to find a 60s kid's TV show that can't be aired in the 21st century (at least, not for children). By the time TV came along, the out-and-out racism of early cartoons was seen for what it was and didn't get into the shows.  But Roger Ramjet probably couldn't be shown as a kid's show today.

Which is a shame.  The cartoon was very similar in tone to greats like Rocky and Bullwinkle and Beany and Cecil.

It really wasn't a show. Roger Ramjet was marketed as very short episodes, about six minutes long* -- including about two minutes of opening and closing credit -- designed to be shown on local TV shows.  Your local Colonel Clown Show** would buy the episodes and run them during their show.  Times, obviously, varied from market to market, and often they'd move around within the show. So unless you spent a lot of time watching Colonel Clown or your local equivalent, you had a hard time following Roger.

But when you caught it, the show was a delight.  Roger (voice of Gary Owens) was your standard big, dumb lug superhero, who took a proton pill, which gave him the power of twenty atom bombs for a period of twenty seconds.*** With his American Eagle squadron of Yank, Doodle, Dan, and Dee, (three boys and a girl) he fought threats to our country, taking the pill at the end to save the day.

Like Rocky and Bullwinkle and Beany and Cecil, the show was packed with jokes for adults and references to political and social events. Anything was fair game.   In addition, the cartoon was incredibly fast paced, fitting in all the action and jokes in a small space.  It also had the same cheap animation of Bullwinkle, which makes it even more endearing.

Most memorable, of course was the show's theme song. Evidently, they couldn't afford to pay a composer for the music, so they just used "Yankee Doodle" with new lyrics:

Roger Ramjet, he's our man
Hero of our nation
For his adventures just be sure
And stay tuned to this station.


As for the talent, Gary Owens gained fame a few years afterwards as the announcer for Rowan and Martin's Laugh-In.  But Dave Ketchum -- the voice of the narrator -- has also be very successful (if more low-key).  He starred in Camp Runamuck -- a universally despised sitcom -- but is more memorable as Agent 13 in Get Smart, who always was hiding away in ridiculous places, like a mailbox or in the walls.

About 120 episodes were made, and they remained syndicated wherever TV stations still ran kiddie show.  However, the theme of the show probably led to its dying off. With the War on Drugs, a children's show that has someone taking a pill to get super powers is bound to stir up more controversy than a 40-year-old cartoon is worth. It shows up from time to time, but not where it can be mistaken for a children's show.

Which, of course, it wasn't. That's part of the fun.

*Including about two minutes of opening and closing credits.  I always wished they'd cut out some of the credits to get more story in.

**An actual show out of New Britain, CT.  Sources say he was originally "Happy the Clown," but I remember it as "Captain Clown."  In any case, he became the Colonel, a change that seemed so arbitrary to my ten-year-old mind that I surmised someone had told him he couldn't use the original name.  Turns out, I was right.  In any case, I don't think they ran Roger.

*** It's amazing what phrases stick in your mind.

The first stanza of the Roger Ramjet theme song:
Roger Ramjet and the Eagles
Fighting for our freedom,
Fly through in and outer space,
not-to-join 'em but to beat 'em!
[The eagles were a small club of young Ramjet aficionados that helped him in his quests to fight evil]
Also, let us not forget his famous Proton Power Pill (not unlike Underdog's Super Energy Pill), which gave him the strength of 20 atom bombs for 20 seconds.
..it's amazing how much crime and terrorism you can fight in that shoert a time, with that kinda power, ain't it?!?

Anyone remember a line from one episode; "Beefsteak pie and swat a fly"

Wasn't there lyrics to the effect of
"When Roger takes his proton pill, the crooks begin to worry.
something, somethimg, "best beware of proton's mighty fury"?

Yes there was in my memory too. The other line was - they can't escape the awful fate of proton's mighty fury.

When Roger takes a proton pill, the crooks begin to worry. They can't escape their awful fate from proton's mighty fury.

In addition to Roger and his "Proton Pills" and Underdog with his "Underdog Super-Energy Pills" there was Super Chicken with his "Super Sauce" (which he usually drank from a martini glass). Any other drug-using cartoon heroes from the 60s?

These were the lyrics for the closing credits only