Sean Connery as Robin Hood.  Sounds like the casting for a first-class action adventure film.  But Robin and Marian is a much different movie, a unique look among films at the part of the legend of Robin Hood (or any hero) that is rarely shown.

The story is about Robin's later years. After spending years fighting in the Crusades with Richard the Lionhearted,* Robin (Connery) returns home to find King John (Ian Holm) running the country, and the evil Sheriff of Nottingham (Robert Shaw) still out there wanting to make his life miserable.  He seeks out Maid Marian (Audrey Hepburn), only to find that she has entered a convent. When the Sheriff tries to arrest Marian, Robin rescues her -- against her will -- and brings her back to the aging members of his Merry Men.

Despite everything, Robin and Marian resume their romance, leading to a final showdown with the sheriff and an amazingly beautiful ending.

The theme of the film is to ask the question "What happens when a hero gets old?" and it develops this in a charming and touching manner. 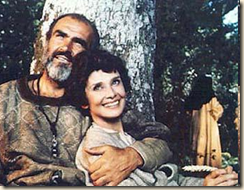 Connery's Robin is one of his top performances.  It's interesting to think that he was playing an old man over 30 years ago.  His Robin is always a hero, even when it might be inconvenient to be one.

Audrey Hepburn is radiant as Marian.  She had been happily retired from films for a decade, turning down many offers until this one came along. Her Marian is radiant in a role that lets her use her strengths of an actress, and the star power of her and Connery together is a joy to watch.

This was a departure for Richard Lester, who was better known for his comedies like A Hard Day's Night, Help!, and The Ritz. Though there are funny moments, the tone is bittersweet and highly romantic in all the best ways.

It's not a swashbuckler, but rather a character study. If you want to see a different view of Robin Hood, this is a film to watch.

*Richard is portrayed as something of a jerk here, which actually is more like how he was in real life. Though a hero in the UK, he wrecked the country's economy with his crusading and generally wasn't much better than his brother John, who's always portrayed as a tyrant.  But he had a cool nickname, so that counted for a lot.

Posted by Chuck Rothman at 7:52 PM

"It's interesting to think that he was playing an old man over 30 years ago."

You can always play older than you are; it's a lot harder to play a lot younger.

And of course, at about the same time as "Robin and Marian," Connery was playing a man in his prime in "The Man Who Would Be King."