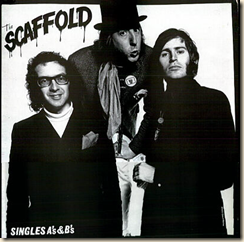 You have to give Mike McGear a lot of credit. When he went into the music business, he had an automatic "in."  His name alone would have opened doors and probably have gotten him a contract. So he changed his stage name to "McGear" and tried to make it on his ability alone.

His real last name was "McCartney."

But McGear didn't want to trade on his brother Paul's reputation. Instead, he joined up with poet Roger McGough and post office cler John Gorman to form the Scaffold. And, to tell you the truth, the Scaffold was not likely to appeal to Beatlemanics. Their music was a combination of catchy tunes, humor, and clever lyrics.

The Scaffold is connected in many ways to the Bonzo Dog Band; they started out in the same venues, and later did albums with former members of the group.  They are not in the Bonzos class as musicians (actually, McGear, McGough, and Gorman didn't play instruments at all), but they have a similar goofy sense of humor.  McGear and McGough had a knack for catchy music that stays in your head, while McGough was an inspired lyricist.

And when I say McGough was a poet, I mean that literally.  He is considered one of the UK's top poets, especially as a performance poet.  His work has appeared in The Norton Anthology of Modern and Contemporary Poetry, and he's been granted a knighthood. In fact, his poem "Goodbat Nightman" was the only poem in that anthology that was also a popular song (by Scaffold, of course).  But his most famous work -- if uncredited -- was the dialog for Yellow Submarine, much of which was his doing.

Scaffold had a decent amount of success.  It helped that they used some top sessions musicians like Jack Bruce, Jimi Hendrix, Graham Nash, Ringo Starr, and a very young Elton John, so the music behind the voices was top notch.

Their single "Thank U Very Much" made the UK charts and they reached number one with "Lily the Pink," an old rugby drinking song cleaned up.

Three albums were released -- Lily the Pink, Fresh Liver and Sold Out, while a live album of their stage show was released a few years ago.  In addition, there are a couple of compilations for the group, which probably capture them better -- they were more a singles and stage act than one that worked with albums.

However, the group couldn't continue forever.  They never made in impact on the US, and all had other interests.  McGough and McGear joined the British comedy rock group GRIMMS, then had solo careers, McGough as a poet, McGear with a couple of solo albums (one produced by his brother).

They left behind a couple of albums, and some fond memories.

Posted by Chuck Rothman at 5:42 PM

Yes. I accidentally hit publish before I was done. It's fixed now.

The Scaffold sang the theme to a British comedy movie: "All The Way Up", made in 1970, and starring Warren Mitchell. They also fronted a B.B.C. children's quiz show called 'Score With The Scaffold'. Its theme ( which they also sang ) included the refrain: "Its Friday! Is Everybody Happy? You Bet Your Life We Are!".

My Dad would love this! He's really into songs like these. I'm sure to share this page to him. Thank you for sharing this with us. More power to you and to your site!
Scaffold

Can anyone tell me the musicians who performed on Today's Monday please?