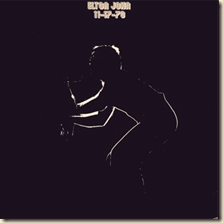 Elton John hit America with the single "Your Song," which immediately characterized him as a sensitive singer/songwriter who just happened to use a piano instead of a guitar.  His later work showed him as a very successful pop songwriter.

But Elton John, at least in the beginning, thought of himself as a rocker in the Jerry Lee Lewis mode. He complained how "Your Song" gave the wrong impression, that he would much rather rock out than play the role of the singer/songwriter.

It was somewhat groundbreaking from the start.  Elton was asked to perform a live radio concert in A&R studios in New York on November 11, 1970.  A small group of people were in the audience, and the set went onto the airwaves. Afterwards, Elton and his producer, Gus Dudgeon**, listened to the tape of the concert and were impressed by its quality. Because of this, and because bootlegs of the concert were showing up, they released it as an album.

It's a high energy, rocking show. The concert*** stared out with "Bad Side of the Moon" from original album.  The original song (from his Elton John album) was a moderate tempo rock song with a string accompaniment.  Here, not only is it stripped down to piano, bass, and drums, but it at a faster, wilder tempo.  "Amoreena" (from Tumbleweed Connection) turns from almost a ballad to rock, while "Take Me to the Pilot," a pretty uptempo rocker to begin with, becomes a frenzied anthem.

The rest of the concert continues at this wild pace.  "Sixty Years On" slows things up a bit, but Elton goes back to rocking with a cover of "Honky Tonk Woman" and the obscure original "Can I Put You On."

The high point of the album is its finale, an 18+ minute version of "Burn Down the Mission," performed at a breakneck pace and interpolating verses from "My Baby Left Me" and "Get Back."

It is an exhilarating experience.

The album sold OK, but was his worst selling album of the early 70s.  It reached 11 on the Billboard charts, but that was nothing for an artist who had seven number one albums. Elton also went in a different direction, moving away from the Jerry Lee Lewis piano pounding to more pop songs. Those who liked songs like "Levon," "Tiny Dancer," or "Daniel," would have found 11/17/70 a bit too different and even his foray into rock and roll -- "Crocodile Rock" -- doesn't come close to the energy he showed on that one night.

The CD is still in print, often for good prices, but iTunes has only portions of the concert (because he included songs by the Beatles and the Stones).  Hopefully, it will be available there, too.

But if you want to see a different Elton John than you're used to, seek out this gem.

** Also the producer of several Bonzo Dog Band albums. I had to mention that.

***The original album changed the order of the songs and left off "Amoreena."

Posted by Chuck Rothman at 9:48 PM

I had taped this concert off of the radio - WNEW-FM - and played it until the tape wore out. Bought the vinyl album, and then later the CD. Still my favorite Elton John.

There is also a bootleg in existence recorded about a week after the Los Angeles Troubador gig at a concert in Riverside, Calif. at Riverside City College. It was a raucus and rocking show that drew about 600 people who weren't entirely sure who he was but left as true believers. How many copies were pressed or how many still exist is unknown to me. I would guess they might be very hard to find.

I bought this album in 1971 at the age of thirteen. Loved it then and it survives the test of time.

Actually the concert originally aired on WABC-FM (which later became WPLJ), not WNEW-FM. Dave Herman, who was a DJ at WABC-FM in 1970, is the voice introducing Elton at the beginning. I remember hearing it air live that Tuesday night.

Regarding the RCC gig - I was asked to go with two friends who had an extra ticket. I declined because I had a biology test the next day, and I really didn't know who he was. The next day, however, I realized I made a ginormous mistake. I later saw him at the Swing Auditorium in Dec. 1970. Great performance.

I went to that concert in the Landis Auditorium at RCC Elton Was great! He really was wild with his costume of cape and pants with a star on his crotch. He was quite a performer and had a challenge since the act before him had just been booed of the stage for being drunk and cursing at the audience. I think the act before him was The Eagles but I'm not sure because they weren't on stage long.
I was so surprised to be able to see Elton in Riverside It's a memory that I will always cherish!

I was at the RCC concert and will never forget his costume and the fantastic showmanship. I really don't remember the music at all.

I was also one of the 600 there at RCC. I hadn't heard much of him before but after that concert I was a blown away fan. He laid on top of the piano and played, he laid on the floor and played. I remember it being a clowns head that he had on his crotch and he pulled a string and it would light up. Good memories.

One of my great regrets. I was at UC Riverside and heard that one my favorite artists had played a few miles away shortly afterwards.
Just saw Rocketman - fantastic!

I was one of the 600. And yes I was blown away by Elton. Probably the best concert ever and didn't even know much about him. Great memory!

I remember it being a clown by his crotch and he pulled a string and it lit up. He also laid on the floor playing and on top of the piano playing.

Hi Mike,
I was at the concert and trying to remember what it cost. If memory serves me, it was $3.00. Do you recall?