As I've mentioned previously, anthology series on US TV are pretty much gone with the dinosaurs. The only way to try to get around it is to use recurring characters and make them involved in the story, like Quantum Leap. So when Wes Craven -- even back in 1992, a well-regarded director of horror -- wanted to try something, he had to create a different hook.  The result was Nightmare Cafe. 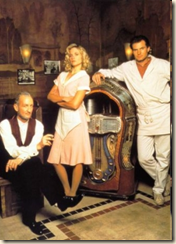 The show was set up nicely in the first episode.  Frank Nolan (Jack Coleman) and Fay Petrovic (Lindsay Frost) coincidentally survive drowning the very same night and go into a small, abandoned restaurant that's near the water. No one is there, and strange things happen:  voices are heard, doors open into places miles away (or even hundreds of thousands of miles away) and a television shows scenes from their lives earlier in the day. And then there's the mysterious Blackie (Robert Englund), whose dry sense of humor shows a devilish tendency of stirring the pot and making a bad situation worse.

It turns out that Frank and Fay died that night. But the Cafe (which is a character all by itself) gave them a second chance.  They will work there and help give other second chances.

And so they run the cafe, which travels randomly from place to place (not unlike the TARDIS), putting them where they can do the most good.  It grants wishes (usually when you don't expect it), shows what's happening to the others on its special TV, punishes those who deserve it, and rewards those who do.

Jack Coleman is your standard hero type as Frank, and Lindsey Frost gives some nice life to Fay. But it's Englund's Blackie who quietly steals every scene he's in, giving you both laughs and chills.

Only six episodes were aired. The show probably sounded too much like an anthology (it was promoted as such, even though everyone working with it took pains to say it was not), and the tone varied -- a deliberate mixture of film noir, horror, and slapstick comedy or whatever fit best into the story to be told.

In fact, it was clear that everyone knew the effort would be doomed. In the final episode, the very funny "Aliens Ate My Lunch," (a send-up of The X-Files a year before The X-Files went on the air, with a combination of aliens, cows, and midgets), they showed a "Where are they now" for all the characters in the episode -- and for Frank, Fay, and Blackie. Perhaps it was the anthology tag, or maybe the horror, but the show never found an audience.

Craven, of course, went on to add to his resume with the Scream franchise, and Englund (who had already achieved horror film immortality as Freddy Krueger) has worked regularly over the years. Coleman worked in TV and is now a regular on Heroes, and Frost has been successful as a guest star.

Maybe there was no chance that Nightmare Cafe would ever succeed, but it is indeed a first-class show that deserved more than six episodes.

Posted by Chuck Rothman at 6:38 PM

Does anyone know the name of the opening song from episode 5?