I wrote previously about how when making up a list of films to discuss here, I discovered the name of John Irwin, a British director whose name meant little to me until I realized I wanted to talk about several of his films.  Widow's Peak is the second.

It a charming little revenge comedy, set in the 1920s in the small Irish town of Kilshannon. The title refers to a hill overlooking the town, where widowed women go to live after their husbands have died. But these aren't a bunch of timid mourners.  Led by Mrs. Doyle-Counihan (Joan Plowright), they are the type of women who speak their mind and always get their way. 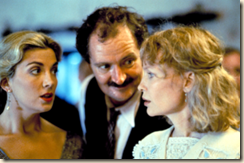 But there is one non-widow living at Widow's Peak -- Miss Katherine O'Hare (Mia Farrow), a spinster who seems to have some secrets hidden away.  And when the Mrs. Edwina Broome (Natasha Richardson) -- who has been living in America comes to town, Miss O'Hare takes an instant dislike to her. Edwina and Miss O'Hare start to scheme against each other.  Soon the entire community is in a uproar.

It's a comedy of manners, and a very funny one, with a surprising and delightful twist at the end.

Joan Plowright is spectacular as Mrs. Doyle-Counihan, who runs the little community as her own person benevolent fiefdom.  Mia Farrow -- in her first role after the messy breakup with Woody Allen -- is surprisingly devious, and Natasha Richardson matches her.