I've always been a history buff, especially war history. And the war I found the most interesting (after the Civil War) was World War I. It was one of the bloodiest of all wars, and filled with military incompetence (another subject I find fascinating). Yet World War I has gotten something of a short shrift by filmmakers. Once World War II broke out, the first war was forgotten except for a handful of films usually focused on the air war.

So a movie about Gallipoli was something I knew I had to see. If you're not familiar with the battle, it was an attempt by the allies to open another front by invading Turkey, a disaster of epic proportions. The plan -- in part developed by Winston Churchill* -- allied troops landed on a handful of beaches and were immediately pinned down by Turkish forces (led by Mustafa Kemel, later known as Kemel Ataturk, the founder of modern Turkey). After several month and horrific losses (mostly by Australian and New Zealand units), the allies retreated.

The campaign was an important point both in Turkish history and in Australian and New Zealand history and Australian director Peter Weir decided to make a movie about it.

Weir had made a couple of critically successful films in Australia before this.  He recruited an obscure US actor, Mel Gibson**, and started the film. 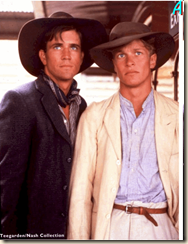 Most of the film is not about Gallipoli. Frank Dunne (Gibson) and Archy Hamilton (Mark Lee) are Australians who met and become friends before deciding to join the army to fight the war. We follow their careers from Australia, to Egypt for training, and finally to Gallipoli itself.

The movie's most memorable moment was the final sequence in the battle, one of the most dramatic and frustrating war scenes put on film.  But it's primarily a film about friendship.

The film was a critical success and made some money at the box office. And when I first saw it, it was really nice to spot a potential star in the film. Of course, that seemed to be Mark Lee, who never really had any major hits.

Weir was able to move to the US on the strength of the film and was soon  was making a mark in Hollywood with The Year of Living Dangerously, Witness, Dead Poets Society, The Truman Show, and Master and Commander: the Far Side of the World.  Gibson also seems to have has some success as an actor and director.

But this is where they both started (in terms of being known to a US audience) and it's a great place to start.

* Who, for all his good points, evidently never saw a topological map of the Balkans and assumed they contained no mountains.

** Gibson had already made the original Mad Max, but it had only a very limited release in the US when Gallipoli was released.

I feel "Gallipoli" is one of the greatest movies ever. It is simply heartwrenching, breathtaking, enlightening, even beautiful. I've seen it a couple times over the years and what really stood out to me this viewing was the friendship. It's a great "guys as pals" movie. These guys are brothers, bros. They just simply get along. They're buddies. I also think the relationship between Archy and his Uncle is really integral to the film. His Uncle means much more to him than his father does. Overall, I just love this film despite it's somber mood. I just can't get over it. What a film!