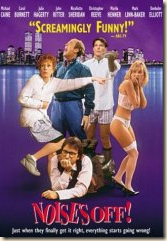 I first became familiar with Michael Frayn from his novel, The Tin Men. It's sort of science fiction (about robots) and was one of the funniest things I've read.  I read a couple of other novels of his, then lost track until I heard he changed to a playwright with Noises Off, and eventually won all sorts of awards for Copenhagen.

I also was a fan of Peter Bogdonovich. He started out with a real bang (literally) with Targets,* but lost his way after the flop of At Long Last Love.

So, when I heard Frayn's play was going to be directed by Bogdonovich with an all-star cast, I knew I had to see it.

Noises Off is a behind the scenes look at the production of a stage farce Nothing On. Director Lloyd Fellows** (Michael Caine) tries to keep order but the characters off-stage lives and stage characterizations lead to slapstick situations and some very funny lines.

The movie and play was designed in three acts at different stages of the production on the road to Broadway.  The first act -- the final dress rehearsal -- is a comic disaster, with people dropping lines, missing cues, and everything that can go wrong going wrong.  The second act shows a later performance -- but from backstage and you see what's going on behind the scenes in the same scene you saw in the first one. The third is opening night on Broadway, and brings the entire disaster to a triumphant and funny conclusion.

Bogdonovich does not try to open up the movie. There's really no point, since the original material is so good that you might as well stick with it. All the acting is first-rate, though Caine is memorable as the director and John Ritter*** is surprisingly good as an actor who stammers badly offstage, but has no problem reading his lines.

The movie got mediocre reviews. Part of the problem is that the play is so good that transferring it to film loses some of the frenetic humor on stage. Anyone who saw the stage production probably was disappointed by the movie, but if you hadn't the material is good enough for an enjoyable film.  Still, it flopped at the box office and sent Bogdonovich back scrambling for work.

Still, despite the carping, it's a very funny film farce, with too many funny scenes and lines to list.  Well worth digging up.

*Not counting Voyage to the Planet of Prehistoric Women, but no one really counts that one.

**I'm using the names in the movie; there are variation in the play.

Posted by Chuck Rothman at 7:50 PM