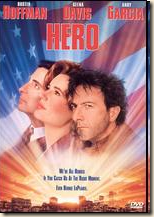 Some directors seem fated to go unrecognized. One example is John Irvin.  And another is British director Stephen Frears.

Frears list of films include Gumshoe, My Beautiful Laundrette, Prick Up Your Ears, Sammy and Rosie Get Laid, Dangerous Liaisons (the John Malkovich/Glenn Close version), and The Grifters. After he moved to Hollywood for The Grifters (a modest success), he got his first big-time cast in Hero, a fascinating look at heroism.

Bernie Laplante (Dustin Hoffman) is a petty thief and lowlife who happens to be in the right place at the wrong time as an airliner crashes. Reluctantly, he pulls people from the wreckage, saving lives, then goes off to avoid the glare of the spotlight.

The mysterious savior becomes a media obsession -- "The Angel of Flight 104" -- and Gayle Gayley (Geena Davis) goes off to find the hero of the hour.  The evidence points to John Bubber (Andy Garcia), who shows up with the evidence -- one of Laplant's shoes -- to claim a reward.  Bubber is charming and sympathetic, but he's also a fraud.  Laplante is sleezy and dirty, but really the hero.

The plot uses this turnaround to say some fascinating things about heroism.  The movie is funny, but also has a lot to say.

Hoffman, of course, is great as Laplante, a riff on his Ratso Rizzo role. Garcia is just as strong, and Davis is good as she starts to fall for Bubber only to begin to suspect he might not be what he seemed.

The movie did very poorly at the US box office, especially for a film with such star power.  It broke even overseas, but Frears seemed to go back to the UK, where he continued with such gems as The Snapper and The Van (semi-sequels to the film The Commitments), High Fidelity, Mrs. Henderson Presents and The Queen.

The film wasn't a drag on his career, but it deserves to be remembered as more than just one name in a distinguished list.

Posted by Chuck Rothman at 9:51 PM