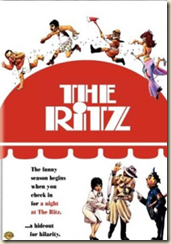 Pure film farce is rare.  Oh, you have comedies, but the rapid-fire humor and outrageous situations and complex plotting is very hard to pull off. And add to that some subject matter that is dicey today and you have a movie that vanishes from consideration.

But when you have one of the funniest characters in film, it deserves to be known.

Terrence McNally, who adapted the screenplay from his original play, set The Ritz in a gay bathhouse.  This gives it a whole new dimension to the heterosexual bed hoppping that characterizes good farce.  And throwing a straight man into that scene leaves things ripe for comic possibilities.  And when you get one of the top comedy director of the time to film it, the result is hilarious.

Gaetano Proclo (Jack Weston) is a salesman from Cleveland who becomes the target for murder by his mob-connected brother-in-law, Carmine Vespucci (Jerry Stiller).  Proclo ends up hiding out in the Ritz, a gay New York Bathhouse, thinking at first that it's like a health spa.  He is quickly disabused of that notion and becomes the romantic target of Claude Perkins (Paul B. Price), a "chubby chaser," who tries to seduce Proclo with promises of candy and other treats (starting with food).  Michael Brick (Treat Williams) is a detective with a buff body and a ridiculous high voice who is looking for Proclo, and also becomes the object of the affections of others in the Ritz. Chris (F. Murray Abraham) is one of the bathhouse regulars who tries to help Proclo in adjusting.

And then there's Googie Gomez (Rita Moreno), an aggressively untalented singer at the baths, who thinks Proclo is a Broadway producer and her route to stardom.  Proclo thinks she is a man in drag, and tries to avoid her, as well as his brother-in-law (who's coming for him with a gun), Claude Perkins and everyone else in the bathhouse.

Moreno invented the character of Googie, performing as that alter ego at parties, where McNally happened to see her.  Speaking with an weirdly exaggerated Puerto Rican accent, she is convinced that she is the greatest talent ever to appear on stage, despite all the evidence to the contrary. She's the type of character that causes you to lean just a little bit closer to the screen just to make sure you don't miss anything she says.

The result is a mad mix of jokes and very funny situations.

The acting is all first-rate. Farce requires good timing, and most of the cast had been in the Broadway version, allowing them to work perfectly as a team to make the jokes work.

And Richard Lester was the perfect director for such a film. Lester had vaulted to the top of comedy filmmaking with A Hard Day's Night (and The Mouse on the Moon), and directed a series of very good films:  Help!, Petulia, The Three Musketeers, The Four Musketeers, and Robin and Marion.  He was famous for his rapid cutting style, something that is almost routine these days, but which was a big revelation in the 60s.  He actually shot this one in a more standard (for the time) style, but his penchant for humor gave it just the right touch.

The movie did well enough, and even got a few Golden Globe nominations, but it faded away.  The subject matter made it unsuitable for TV and, the AIDS epidemic made the behavior portrayed in it much too dangerous to be funny.

But I do miss Googie Gomez. If there was any character who deserved to have more films, it was her.

Just in case you're curious, Frances Negron-Mutaner writes a chapter in Boricua Pop about Rita Moreno's career. In "West Side Story and Puerto Rican Identity" she closes by talking about how Moreno came up with the "Googie" character.

I love this movie. Lester is a favorite since way back in his early days. The Bed Sitting Room is just brilliant. But is The Ritz PC? Whether you think they should, or not, these things matter to me. I want to recommend the film, but I wonder if it's so stereotyped as to be offensive. And it's certainly pre-AIDS (as is Robert Altman's film of a Chris Durang play, Beyond Therapy where the specter of AIDS hangs unmentioned over the proceedings).

It's by Terence McNally just after his more experimental period when he often wanted to rile people up. I'm not sure if it's PC, however, I've never met a gay person (myself included) who was offended by it. It's camp--much of that camp played by gay actors (more on stage) and written by an openly gay man. Camp humour deals in stereotypes--plays up stereotypes, but... It's last Broadway revival, in 2007, was very well received, for what it's worth (Rosie Perez was Goochie). However, you may have a point about AIDS--there was a 1983 revival, just most New Yorkers, certainly gay ones, would be becoming aware of the disease, closed after opening night despite having Casey Donovon, the Boys in the Sand gay porn star, in the cast.