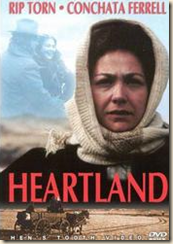 We all know what the American West was like -- outlaws and cowboys and Indians all shooting it out among themselves, with an occasional sheepman for color.  The marshal wore a star and everyone lived in towns with wooden sidewalks and hitching posts, whose only businesses were the livery stable, the general store, and about three saloons, all of which had those swinging half doors and a poker game going on at all times.

Heartland is nothing like that. It's one of the more realistic portrayals of the American West, concentrating on the human drama instead of shoot-'em-ups.

That's because it's based on a real story.  Elinore Pruitt Stewart wrote letters back East about her life, and someone managed to collect them an turn them into a movie.

The plot is simple.  Eleanor Randall (Conchata Ferrell), with her daughter Jerrine (Megan Folsom), travels to Wyoming to work as housekeeper for the reclusive and taciturn farmer, Clyde Stewart (Rip Torn). Despite his pennypinching ways, they slowly develop a relationship until Clyde asks him to marry her.  But life is difficult and lonely on the plains and it puts a strain on their lives.

This is a real human story, the type of tale that tells more about how people actually had to live than any other Hollywood film.  The cinematography (by Fred Murphy) gives the audience a real idea about just how desolate life on the plains could be, and how much a struggle it was just to survive.

I've spoken about my admiration of Conchata Ferrell  before, but this is truly her best role.  Eleanor is brave, determined, and very human, fighting to make a better life for her daughter and herself.  It's a shame she hasn't been given a chance to repeat something this memorable.

Rip Torn is also terrific as Clyde, a man of very few words and who seems emotionally distant, but who shows flashes of the true personality beneath his hard exterior.

The film was an art house hit (at a time there were still art houses), but not a big money maker.  Torn's career took off afterwards (this was at a relatively low point in his career curve, before he started getting major roles again.  Director Richard Pearce worked in TV and got good reviews for his film The Long Walk Home, but has never had something like this to work with.

If you're fond of films with great characters and an unblinking look at how the West was won, this is a good place to start.