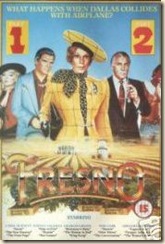 TV miniseries are almost always dramas. If you want to do a comedy, you create it as a series, mostly because it's unlikely that people will want to stay for several nights (some have suggested that comedy usually outstays its welcome when it goes on for too long, and a look at movie running times seems to confirm that).  But one exception was Fresno.

This was in the 80's, when prime time soaps like Dallas, Dynasty, and Falcon Crest ruled the air.  So Barry Kemp and Mark Ganzel decided that the time was right for a spoof of the prime-time soaps.  Kemp decided on Fresno because at the time the city was listed at the top of several "worst place to live" lists.

Fresno was the epic of the Kensington family, wealthy raisin growers and the threat to their empire by the evil raisin tycoon Tyler Crane (Dabney Coleman). Charlotte Kensington (Carol Burnett) drinks too much, mourning the death of her husband in a dehydrator accident. Cane Kensington (Charles Grodin) tries to save the farm by making a deal with to be a toxic waste dump, while his wife Talon (Terri Garr) goes from one affair after another, and sets her sights on the farmhand Torch (Gregory Harrison), who always appears without his shirt.

The plot is impossibly convoluted, playing off the nighttime soap opera cliches of the time. And while there are few one liners, the little tale about the naming of the city is funny:

Two Spanish conquistadors present a load of grapes to the commandante.  He takes one taste and spits them out.

"You call these grapes?" he asks.  "They taste like fresno!"

Everyone had a great time on the show. Dabney Coleman is always great as a villain and the others get the most out of their roles, underplaying very nicely.

The show didn't overwhelm in the ratings.  It was probably too subtle, and the six hour length was a bit daunting, especially since the humor was more like Mary Hartman, Mary Hartman than Carol Burnett's soap opera spoofs. In addition, it was suggested that it might have been a little too well written -- the plotting was never as slapdash as in the real things.

Like most miniseries, this vanished after it was first run.  It got some Emmy nominations, but not in any category anyone but the people nominated (and their families) cared much about.  Mark Ganzel went on to produce Coach and the infamous Dads*.

Fresno has been on DVD, but seems to have gone off the market.  It would be great to see it again.

*Dads would probably be up there among the worst comedies on TV, except for the fact it I'm not sure if it ever appeared on TV.  However, the tape is still being used by market research firms, who will ask you to view a videotape of it purportedly to determine if it goes on the air. In actuality, they want you to watch the ads in the middle and then, when they do survey you, they ask two questions about the show and a dozen about the ads.  I don't know why they don't just send you the ads to see instead of trying to fool you (not that anyone would be fooled by this gambit).  The last time a market research firm asked me about sending me a video to give my opinions about the show, I asked them, "Are you going to send me Dad's again?"