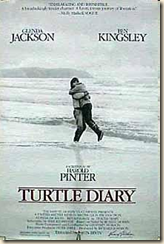 I keep a list of films and shows I want to write about here on the blog, and sometimes I can see patterns.  I know I've been featuring Alfred Hitchcock, and also Harlan Ellison, as well as Stephen Frears. But sometimes I find other connections that I hadn't realized -- good films that have a director in common, but which I never realized the connection. This happened awhile ago when I realized that two fine films -- Little Voice and Brassed Off -- had the same director.

But John Irvin is the first time I listed three films before realizing the same director was involved in each.

I'll start with Turtle Diary. As you can see by the screenplay credits, it had an impressive genesis.  I remember Russell Hoban's Riddley Walker as an interesting science fiction novel, one of the few (A Clockwork Orange is another) that created an entire new language for the future and told the story in that language. And Pinter, of course, is one of the 20th century's greatest playwrights.

Turtle Diary is the story of William Snow (Ben Kingsley) and Nearea Duncan (Glenda Jackson), two lonely people who meet at the turtle tank at the London Zoo and embark on a quixotic task to release the turtles into the wild.  They are aided by the turtles' keeper George Fairburn (Michael Gambon) and work to free the turtles -- and also free themselves.

It's a quiet movie without a lot of plot, but Jackson and Kingsley are marvelous as two shy people who learn to trust one another and open up to the world. It's charming from start to finish, with nice flashes of humor.

Irvin went on to direct some other films in the same vein (which I'll talk about some day), but this one really stands out.

Posted by Chuck Rothman at 7:14 PM