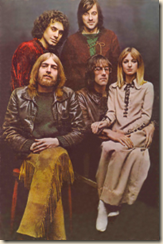 The Yardbirds is one of the seminal groups of British rock, second only to John Mayall's Bluesbreakers as the place where great musicians first came to prominence. Their original lead guitarist was Eric Clapton, of course, and when he left, Jeff Beck was chosen as his replacement.  Later, Jimmy Page joined the group, but disagreed with Beck, who went off to form the Jeff Beck Group with Rod Stewart doing vocals.  There were further disagreements and eventually Page took over the group and formed the New Yardbirds (with a trio of unknowns named Robert Plant, John Bonham, and John Paul Jones) to fill out some concert dates.*

But the least known connection -- and the one that seems so unlikely -- was Renaissance.

You see, the leader (and vocalist) of the group during much of its time was Keith Relf, not the guitar heroes that gave it its fame.  When he and Page started arguing about the direction the group was going, Relf (along with original drummer Jim McCarty) went off to form Renaissance.

It was a radical departure from the heavy blues (and India-influence music) that made the Yardbirds famous. Relf was going for a more acoustic sound.  He and McCarty provided a rock basis, and the real find -- keyboardist John Hawkin -- provided a baroque classical  and jazz-tinged mood. Relf's sister Jane provided some beautiful vocals and the result was an album entitled simple "Renaissance."

The album starts with a bang with a long piano intro to the first song "Kings and Queens" and never disappoints. The other songs ("Innocense," "Island," "Wanderer," and "Bullet") are all exciting primarily because of Hawkin's amazing piano and Jane Relf's voice.  It is a powerful melding of classical and rock music, and a first-class debut.

Alas, it did poorly, not even charting. A second album was recorded but left  unreleased, at which point the Relfs and McCarty left the group.  But the group continued on. They added Annie Halsam on vocals and emerged with the album "Prelude," (which had none of the original members**) at which point the name Renaissance because a cult favorite.  But the group was blander and smoother, without the edge of Hawkin's piano to give it bite.

In many ways, this is a parallel to the situation with Blood, Sweat, and Tears, whose original lineup was not the one that became a success (though BS&T were more successful, and actually had memers of the original group when they found their success). Keith Relf tried several bands before dying by accidentally electrocuting himself while playing guitar.  The other members of the group formed Illusion, which had limited success and split up, Hawkin joining the Strawbs. The art rock movement not only was dead, but was the subject of derision by punk rockers, so there was no point any more.

I'm a fan of the art/rock genre -- the melding of classical and rock -- and the first Renaissance is one of the high points of the genre.

*I can imagine people showing up and complaining that it was only Page and a bunch of nobodies and demanding their money back.

**Jim McCarty has a credit on the album, but was not the regular drummer.