The Horn Blows at Midnight 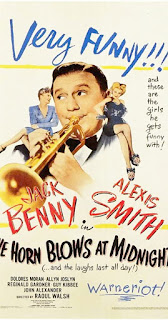 Some movies get a bad reputation despite the fact they aren’t all that bad.* It’s even worse when their star turns it all into a joke. Jack Benny often got laughs by referring to his movie The Horn Blows at Midnight and most would think of it as a total misfire. But Benny often joked about things that just were not true** and he saw the references to the movie as a potential for laughs and kept at it. What was on the screen may have flopped, but there’s nothing wrong with it.

Athanael (Jack Benny) is third trumpet in a radio band, but never gets the opportunity to play the highbrow music he wants to play, despite the encouragement of his girlfriend Elizabeth (Alexis Smith). During a commercial, he falls asleep and dreams he’s been delegated by the Chief (Guy Kibbee) to play the trumpet at midnight to destroy the Earth, which has been a disappointment. So Athanael is sent to Earth to fulfill his mission.

The movie is gently humorous throughout. Benny basically just plays himself, though without the usual running jokes that he was famous for. Alexis Smith is good as his love interest.*** The film is pretty much par for the course for comedies of that day.

The film is filled with the great character actors of the time and even has a small role for Robert Blake, who became a star many years later in Baretta.****

Director Raoul Walsh was a Hollywood veteran with many successes, but primarily with action movies like The Roaring Twenties and High Sierra, He also did comedies, but this was his first attempt at fantasy/comedy. He continued with great films like White Heat.

So why the bad reputation? Certainly Benny had everything to do with it. He often joked about how terrible it was and it certainly was a major flop. I can see several reasons for that. First of all, President Roosevelt died only a week before it premiered, so people were not in the mood for a comedy. In addition, people probably didn’t want to go to a movie about the end of the world while World War II was still raging. And it’s tricky to root for Athaneal trying to kill everyone on Earth. Finally, any story that shows it’s happening in a dream is going to end with the dreamer waking up, removing any stakes from the story.*****

The studio clearly saw the problems with the set up: their trailer makes no mention of any of the plot and plays up the idea of Jack Benny as a romantic lead (Jack Benny?). I understand why they didn’t talk about the story, but the quickest way to turn off an audience is by false advertising.

So the movie was a notorious flop, made more notorious by it becoming a punchline in Benny’s show. Still,it’s a decent 40s supernatural comedy.

But Benny didn’t hate it all that much: he did a radio version a few years later, and redid it for television for Omnibus in 1953. I’ll talk about that version next week.

**I can’t think of any comedian who was so self-effacing, always ready to make himself the butt of a joke. He made a career of playing up his miserliness, but in real life he was a generous man

***Benny resisted her casting, not because he had any objection to her acting or personality, but because he was old enough to be her father.

****Blake actually started out with Our Gang comedies, using the name Mickey Gubitosi. He had a small role in the classic The Treasure of Sierra Madre" as the boy who sells Bogart the lottery ticket.

*****This may have been a way to soften the concept for audiences, but it was a poor one.

Posted by Chuck Rothman at 5:37 PM