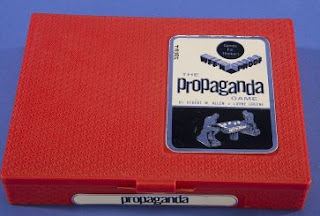 Educational games are certainly heavy on the education, but often light on the the game. The Propaganda Game is an example of that, but in this case the education end is something people should pay attention to.

The concept seems to have been developed by Lorne Greene. While not shooting Bonanza,* he considered what went into making a person a clear thinker. He joined up with Robert W. Allen, who had had success with the logic game WFF ‘N Proof, and they created a game to teach the various logical and rhetorical tricks that tricked people in arguments. The final result consisted of six categories (Self-deception, Language, Irrelevance, Exploitation, Form, and Maneuvers) that consisted of 8-10 different types of propaganda techniques. Game play consisted of looking at cards and trying to see which of the techniques was being used.

The actual game was packaged in a small red plastic box**, Inside was the instruction book, some game cards, tokens, and other gear.

I had the game when it came out. It wasn’t much fun to play, but I reread the instruction book over and over to identify techniques. Even now, I use some of the titles instead of the more common ones.***

The game was not exactly a popular smash, but it sold enough, usually to schools. It looks like it’s still available today for teachers as an online teaching tool. I doubt anyone ever put it on their list of favorite games, but the ideas involved should be essential for everyone.

**Which, for some reason, fascinated me as a child.

***”Victory by Definition” nowadays is usually called “One True Scotsman,: though there are subtle differences between the two.

Posted by Chuck Rothman at 2:00 PM