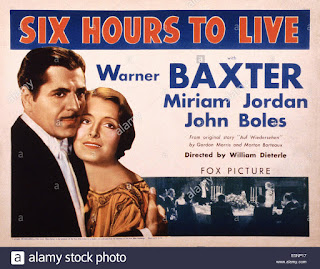 Hollywood was slow to embrace science fiction. Outside of Frankenstein and SF horror, it didn’t really crop up until the 1950, and didn’t become respectable until 20 years later. I was delighted to find a pre-code example when I heard about Six Hours to Live.*

Captain Paul Onslow (Warner Baxter) is representing his county at a treaty conference, where he is the only opposition. His position leads to death threats and when he is returning back to the place he is staying with Baroness Valerie von Sturm (Miriam Jordon), someone takes a shot at him. It misses, but it leads Valerie to fall in love with him, much to the consternation of Karl Kranz (John Boles), her long time friend who loves her. Meanwhile Professor Otto Bauer (George F. Marion) visits the home of Valerie’s father, Baron von Sturm (Halliwell Hobbes) with an exciting new device that can bring the dead back to life – but only for six hours. And when Onslow is strangled, they want to bring him back to catch his murderer.

The idea is a great one, and could have been made into a taut thriller like D.O.A. Unfortunately, they went in a more philosophical direction. I suppose there isn’t much suspense possible with Onslow knowing his murderer from the start, but the story does drag a bit. Still there some good moments, most notably when Onslow gives his money to a prostitute (Irene Ware) in order to give her a new start.**

Warner Baxter was a big star at the time, having just won the first Oscar for Best Actor, and ended up with a long career, most notably as the lead in 42nd Street the same year. Most of the rest of the cast had far shorter careers.

Director William Dieterle was also quite successful, usually with biographies and period dramas. He also did the Max Reinhardt version of A Midsummer Night’s Dream in 1935.

It’s hard to determine the success of the film. Despite the presence of Baxter and some good reviews (The New York Times spoke highly of it), it seemed to have just faded away.

It’s an interesting example of an early SF trope and certainly deserves rediscovery.

**This being pre-Code, they are quite upfront about her occupation. In fact, Ware is billed as “The Prostitute” in the credits. the Times, however, listed the character as “The Woman” in their review.