A Trip to Mars (Himmelskibet) 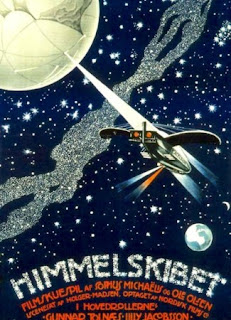 People tend to forget how international the silent film industry was. Hollywood was king, but many other countries had film industries and it was relatively easy to translate films so they could be seen in different languages. A Trip to Mars was an example from the Danish film industry, and is a landmark film in many respects.

Avanti Plantearos (Gunnar Tolnæs) decides to make his mission to travel to Mars. Aided by his father (Nicolai Neiiendam) and sister Corona (Zanny Petersen), he spends two years developing the space ship Excelsior, his work scoffed at by Professor Dubius,* who has tried and failed. Nevertheless, Avanti gathers a crew, including his friend Dr. Kraft (Alfe Blütecher) and the American David Dane (Svend Kornbeck). They journey takes months, and after surviving a mutiny, they land on Mars, an advanced civilization of vegetarians who have eliminated all conflict. Trouble ensues, and Avanti is aided by Marya (Lilly Jacobson), daugther of the Mars’s leader (Philip Bech).

The movie it notable in being the first feature science fiction film. Though there were short subjects earlier (e.g., Méliès, A Trip to the Moon), feature films were rare, and science fiction was not considered a good subject. Many of the elements soon became clichés, but weren’t tired in 1918.**

The movie consists of a a series of episodes.*** The mutiny story is quite good for the time, as is the lightning storm and Avanti’s trial.

The film is also a spirited plea for pacifism. Since it was shot while World War I was raging, that’s understandable (Denmark was neutral in the war). There was also a religious theme that seems a bit heavy-handed.

Director Holger-Madsen was an actor and director and continued to direct in Denmark into the 1930s. Of course, once sound came in, markets constricted and Denmark was at an especial disadvantage because the Danish-speaking market was small. Subtitling a movie was far more expensive than reshooting the intertitles, and there was always the problem of not losing them against the background. Danish film suffered and they struggled. The next science fiction film out of Denmark was Reptilicus In 1961.

Overall, though the film is a fascinating look at early cinema, and the effects are pretty good for the time.

Note: The movie is one of many that are available from the Danish Silent Film Website. It’s worth a look if you are interested in silents, and the prints are beautiful

**I don’t know how popular the film was in the US, but it’s unlikely to have influenced Hollywood films. The Excelsior resembles the spaceships in the Flash Gordon serials, but I doubt it was an influence.

***It’s listed as being “in Six Parts,” but I don’t know if it was shown that way or as one film.

Posted by Chuck Rothman at 1:10 PM