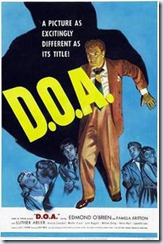 From the start, D.O.A.hooks the audience with one of the most memorable opening sequences in film. We see a man striding purposely into a police station as the credits roll. He asks directions and walks down a long hallway and into the office.  It’s homicide and the man (who we’ve only seen from the back) says he wants to report a murder.  The chief detective asks the obvious question:  “Who was murdered?”  The camera then shows Frank Bigelow’s (Edmond O’Brien) face for the first time.  His answer:  “I was.”

The rest of the movie lives up to that hook. Bigelow is an accountant and notary public, with a simple life in a small town until he goes on vacation in San Francisco.  When in a nightclub, someone switches his drink and the next morning feeling ill, he calls a doctor.  He’s been poisoned and there is no antidote, so Bigelow had to sold the mystery of who poisoned him before he dies. It takes him to the dark underside of the city.

The setup is irresistible, a hook that keeps you going as Bigelow slowly stumble onto the truth.  It’s all O’Brien’s show, and the actor manages to mix despair with determination.

Director Rudolph Maté was already a well-respected cinematographer when he made the switch to directing and D.O.A.  was his third attempt.  It is assured and suspenseful and is probably his best-known film, especially because it lost copyright and can be found online.

Posted by Chuck Rothman at 7:25 PM