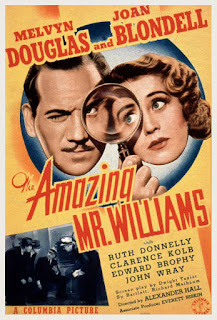 Sometimes an actor sticks in your memory and you don’t see him again (or even know they name) for a long time. For me, one of them was Clarence Kolb, the gravel-voiced Mr. Honeywell of My Little Margie. His lanky figure and deep, rough voice stayed with me for years until I saw him again in His Girl Friday. And when I heard about The Amazing Mr. Williams, I wanted to check him out. What I discovered was a badly overlooked movie, a combination of romantic comedy and serious detective film.

Kenny Williams (Melvyn Douglas) is the city’s best detective, solving crimes no one else can figure out. He’s engaged to Maxine Carroll (Joan Blondell), who is frustrated that he constantly have to break dates with her  because his boss, Captain McGovern (Clarence Kolb) needs him to solve a murder.

Williams honestly tries to make time for Maxine, but something always comes up. At one point,McGovern asks him to take a criminal Buck Moseby (Edward Brophy) to the upstate prison. The trip would require him to break  another date, so he introduces Moseby as an old friend and they go out on a double date with Maxine’s roommate Effie (Ruth Donnelly). Of course,complications ensue.

The movie strikes a clever balance between the two elements, switching from romance to detective. Williams clearly shows his value as a detective, coming on the scene and finding things that the other cops have missed.

Melvyn Douglas is efficient in the role and shows a character who is married to his work, even though he loves his fiancée. Joan Blondell is excellent as Maxine, and effortless pulls off the twist at the end. Kolb is always fun to watch, as was Edward Brophy, a busy character actor who played slightly dumb criminals.

Alexander Hill was a busy director in the 30s, but few of his movies were all that memorable. The best known seems to be My Sister Eileen,” which formed the basis for Leonard Bernstein’s Wonderful Town” but the movie was just an adaptation of a Broadway play.

Overall, The Amazing Mr. Williams is a light romantic comedy that holds up fairly well.

Posted by Chuck Rothman at 4:25 PM