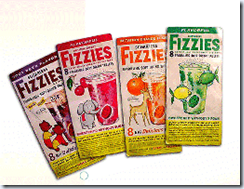 Fizzies were developed by Lem Billings, a chemist.  He probably got his inspiration from Alka-Seltzer, which came in a tablet the effervesced when dropped in water*  Billings developed a tablet that did the same thing -- but turned into a fruit-flavored carbonated soft drink.  The product was introduced by the Emerson Drug Company and eventually bought and marketed nationally by Warner Lambert.

At least, that was how they were supposed to work.  The problem was that the tablet was not big enough to flavor a full glass of water***.  So, as a kid, you'd drop a tablet into the water and watch it fizz and color the water, but it tasted only vaguely of fruit and the carbonation lasted about 30 seconds after the tablet dissolved.  Sometimes you'd drop in two tablets in the hope of actually getting some flavor out of it; that rarely worked.  Occasionally, on a dare, a kid would put a tablet in his mouth to see what happened.  I never did, but I suspect the result would have been similar to Zotz -- only 20-fold.

Part of it was probably due to one of the things the bragged about in their ads:  Fizzies had no sugar.  Instead, it used saccharine and cyclamates to flavor it.  I would say the chemical taste was a turn off, but I really don't recall much taste at all.

Here is a look at a Fizzies ad, though the one I remember was an on-air plug by Shari Lewis who talked about a boy who had some Fizzies in his bathing suit.  When he went swimming, it was the day Lake Michigan became superior.  The pun was about as good as the drink.

Fizzies died out in the 70s as kids finally caught on, and were probably killed when cyclamates were banned.  It seems to be available online, its sales fueled by nostalgia and selective memory.  Still, there is something great about the concept of soda-in-a-pill, even if it never matched its expectations.

**Cola was occasionally added as a flavor.

***At least, not the size shown on the commercials.  Compare the size of the glass where the tablet is dropped (along with the fact that some of the bubbles are animated to make it seem more effervescent) with that the clown drinks from.  Back then, of course, it was considered fair play to do anything in a commercial to make the product look better.

Posted by Chuck Rothman at 2:02 PM

I am remembering a product like Fizzies from back in the 1960's, and I hope you can answer my question. Did Fizzies company ever produce it in a stick-form, which was then twirled around in a glass of water? I am hoping to find that product, I told all of my grandchildren about it and they would like to know if it is available, too.
Maybe it was a copycat product by another company?
Please have an answer for us!

I am remembering a product like Fizzies from back in the 1960's, and I hope you can answer my question. Did Fizzies company ever produce it in a stick-form, which was then twirled around in a glass of water? I am hoping to find that product, I told all of my grandchildren about it and they would like to know if it is available, too.
Maybe it was a copycat product by another company?
Please have an answer for us!

Do you mean Pixy Stix?

I remember these from the 60's.....I was around 4 or 5 but none of my brothers or sisters remember them. I thought I was going crazy. Still haven't been able to come across them.

Saw them on ebay today. Made with nutra sweet 6 tabs 7 dollars? They wre 8 for 19 cents

I remember using them in Vietnam to hide the strong taste of the calcium hypochlorite used to "purify" the water and to cover up the red color of the oxidized iron salts. We considered ourselves fortunate to be able to get Fizzies.

The article about Fizzies is very informative and interesting, I remember the drink and its flavor, Its very nice in taste as well at affordable price.

I have some right now in the box but they are not as good as the originals in the foil packets in which you would punch-out the tablet. I liked the strawberry flavor the best.
I miss them and sure would be cool now for camping etc... I also remember they were so good that I would chug the whole glass down, & had to make another!