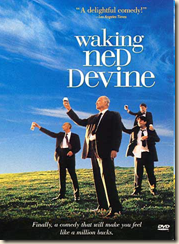 I'm a sucker for charm, and for farce. Waking Ned Devine has both, a quiet little Irish comedy that leaves you laughing.

In the town of Tullymore (population 52) on the Irish coast, word gets out that someone from the village has hit it big in the lottery.  But who? Jackie O'Shea (Ian Bannen) and Michael O'Sullivan (David Kelly), two old moochers, want to know, figuring they can cadge a bit of money from the winner.  After a diligent bit of reasoning, they realize the only person it can be is Ned Devine (Jimmy Keogh).

Sure enough, he has the winning ticket.  Unfortunately, he is dead -- of shock at learning the news.

Ned has no family.  The lottery money would go back to the state. Which Jackie and Michael think is a shame.  So the concoct a plot to pose as Ned and take the money from the lottery claim agent.  The entire town gets involved, planning to split the money.

But there's a fly in the ointment.  Lizzy Quinn (Eileen Dromey) refuses to take part in the scheme.  And she can get a 10% reward if she turned everyone in for fraud . . .

There is also a subplot about Pig Finn (James Nesbit) and Maggie O'Toole (Susan Lynch).  Pig (who raises pigs) want to marry Maggie, since he's the father of Maggie's son Morris.  Maggie refuses, and Pig tries to change her mind. 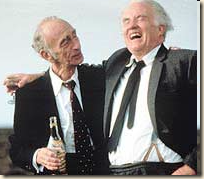 The movie is funny from start to end.  Ian Bannen and David Kelly are great as the conniving Jackie and David, with Kelly especially good (he's probably best known to American audiences from his part of O'Reilly the carpenter in Fawlty Towers).  Both turn on the charm in especially winning roles.

Dromey is also great as Lizzy Quinn. The final resolution of her situation is one of the comic highlights of the film.

Director Kirk Jones later helmed the delightful Nanny McPhee and seems to be working on a film now with Robert DeNiro. This was his first feature, and he brings out plenty of sweet and quirky performances.

It is. ultimately, a tall tale, but one shown with such charm as to be irresistible.

Ian Bannen was one of my favourite actors, brilliant in such films as 'Flight Of The Phoenix', 'The Offence' and 'The Hill'. So sad that he died in a car crash not long after this picture was made.

I recently came accross your blog and have been reading along. I thought I would leave my first comment. I dont know what to say except that I have enjoyed reading. Nice blog. I will keep visiting this blog very often.