(1983-84)
Produced byTom Patchett and Jay Tarses
Starring Dabney Coleman, Joanna Cassady, John Fiedler, Max Wright, Geena Davis, Meshach Taylor, Charles Robinson
IMDB Entry
The first rule of casting your TV show is to have a likeable main character. But what happens when you don't want a likeable character? When your star's most famous role is being one of the blackest of comic villains? Well, you end up great but forgotten.
The show was designed as a vehicle for Dabney Coleman. At the time, Coleman was best known at the double dealing mayor in Mary Hartman, Mary Hartman, the villain in Tootsie,  and as the nasty boss Franklin M. Hart in the movie Nine to Five, a male chauvinist pig of towering proportions.* The producers, Tom Patchett and Jay Tarses were former writers for the MTM productions like The Bob Newhart Show and decided the best way to work around it was to use good writing and a nicely sympathetic cast.
Bill Bittinger (Coleman) was the host of a mid-day talk show in Buffalo, NY. He was egotistical, vain, sexist, conniving, two-faced, and sneaky, though managed (most of the time) to keep his true nature off the air. 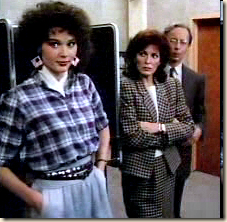 He did drive the others on the show crazy, though.  They included Jo Jo White (Joanna Cassady), his director; Karl Shub (Max Wright), the station manager; Woody (John Fielder), the stage manager (who was independently wealthy, but still loved his job); Wendy Killian (Geena Davis), his research assistant; Tony (Mesach Taylor), the assistant director, and Newdell (Charlie Robinson), the make-up man who didn't take any of Bill's guff.
As you can see by the cast list, there were talented people, and the show was well regarded by critics.  And it didn't help that there were some controversial themes.  One show -- a two-parter called "Jo Jo's Problem" was a very funny and touching episode about Jo Jo mulling an abortion**.  It also didn't help that NBC didn't have any idea what to do with the show, so let it out to die.
I can't single out anyone in this excellent cast.  I've been a big fan of John Fielder (best known as the neurotic Mr. Peterson in The Bob Newhart Show*** ) and his Woody is wonderful -- a sweet guy who knows that Bill really has a heart of gold (Bill doesn't, of course).
Geena Davis was also memorable. She had only appeared in a small part in Tootsie at the time, and this was just a wonderful role for her. Her Wendy was a delight to watch.  Max Wright later had TV success in Alf, as did Meshach Taylor in Designing Women, and Charlie Robinson in Night Court.
But talent isn't enough in the TV game.  Ratings matter and despite acclaim and awards (11 Emmy nominations and one Golden Globe win), the show was canceled after two seasons.
Coleman tried a few more times to headline a comedy (The Slap Maxwell Story, Drexel's Class, and Madman of the People), but, even though they were well regarded, too, audiences didn't show up.  Ultimately, his character's abrasive personalities didn't play well in prime time.
Still, Coleman has remained busy, as have all the other main members of the cast. They show may have been forgotten, but its influence lives on.****
*It was hard to take him seriously when he showed up in On Golden Pond as Jane Fonda's fiance and later husband; you got the impression he had something nefarious on his mind.
**One of the last network shows that portrayed a main character deciding to end the pregnancy; even now, that topic is off limits.
***And on Broadway as the only white member of the original cast of Raisin in the Sun.
****Four footnotes -- a record.  But I wanted to say that Pardon My Enthusiasm is now a successful show with an unlikeable character -- the type of thing Buffalo Bill  was trying to do.
Posted by Chuck Rothman at 8:06 PM

A terific show! One ofmy favorite comdeies of all time, up there with My World and Welcome To It and The John Larouquette Show

I was a production assistant on Buffalo Bill. Dabney Coleman et al are, in real life, sweet and lovable people. This was in 1984. Can we have reviews written for important shows with proper English grammar and punctuation? Or is this asking too much? "The show as designed as a vehicle for Dabney Coleman." That's not a sentence (see Strunk and White.) and,"Ultimately, his characters's..." c'mon people - "characters's???"
Give this show the respect it deserves and write a damned article with respect.

I was a production assistant on Buffalo Bill. Dabney Coleman et al are, in real life, sweet and lovable people. This was in 1984. Can we have reviews written for important shows with proper English grammar and punctuation? Or is this asking too much? "The show as designed as a vehicle for Dabney Coleman." That's not a sentence (see Strunk and White.) And, "Ultimately, his characters's..." C'mon people - "characters's???"
Give this show the respect it deserves and write a damned article in English.

If you want to serve as proofreader, I'd be glad to have you.