Nuns on the Run

Poor Eric Idle. He never really established himself once he left Monty Python, despite being the one person who wrote sketches without any partner. He was limited to guest star roles in so-so comedies (and horrible ones, like Nearly Departed) and voice work.  He also worked on turning Monty Python and the Holy Grail into Spamalot (where he gets songwriting credit*)

Alas, his best post-Python work was in a very funny movie that no one has seen, called Nuns on the Run.

For title alone, it clearly is a movie worth watching.

The situation is very similar in situation to Whoopi Goldberg's Sister Act, which came a couple of years later (but whose basic script was written before). 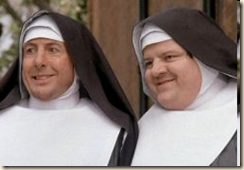 Brian Hope (Robbie Coltrane) and Charlie McManus (Eric Idle) are two low-level gangsters who want to leave the mob. Their boss doesn't like this and tries to have them killed -- after they collect some money for him.  But they escape with their lives and the money and end up having to hide out in a convent.

Charlie knows nothing about Catholicism, and has to lean from Brian. The two have to deal with being men in a woman's institution (including the showers), plus dealing with Brian's girlfriend Faith (Camille Coduri).

It's really Robbie Coltrane's movie. His has most of the best lines (the role was originally offered to Michael Palin) and is a very funny presence. Idle is good as Charlie, though, as he tries to figure it all out while not blowing their cover.

The movie did adequately at the box office, but was no hit. Director Lynn went on to direct My Cousin Vinnie and The Whole Nine Yards, far more conspicuous success.  Coltrane, though well-liked in the UK, never was able to establish himself in the US.  He was certainly not leading man material, but seems to be a fine character actor. His career wasn't helped by the outcry over the great but forgotten The Pope Must Die!, which might have made a difference.

It's a nice little comedy that, like many, got lost in the shuffle. As a footnote, this was the last major production of Hand Made Films, George Harrison's film production company that produced a nice string of British comedies in the 80s.

*Incorrectly in the case of the song "Brave Sir Robin," which was written by his friend Neil Innes of the Bonzo Dog Band)>

Posted by Chuck Rothman at 7:35 PM

A very funny film indeed. Camille Coduri has been seen more recently in the new 'Dr.Who'. I have just viewed Idle's 'Rutland Weekend Television' again after 30 years and, while its unquestionably dated, has some very good sketches, such as a send-up of Ken Russell's 'Tommy' and of course 'The Rutles' ( which later became a T.V. movie ).

I hadn't realized Camille Coduri had shown up on Doctor Who.

I haven't seen the Rutland Weekend Television shows, but I did recently get a chance to see Do Not Adjust Your Set.