Jeff Wayne's Musical Version of the War of the Worlds

The rock opera seems to be long past dead. The idea of an album with a theme and plot is quaint in a time when people buy songs individually, but it was an important subgenre in the 60s and 70s.

And one of the best (if not the one with the clunkiest title) was Jeff Wayne's Musical Version of the War of the Worlds.  Wayne started out writing music for West End musicals in London and moved on to be a record producer for many years. But Wayne was still composing, and, in 1978, got a group of big names together to record his take on War of the Worlds. 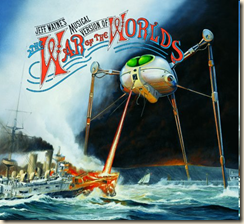 The album follows Welles's novel more closely than any other adaptation of it.  Wayne knows enough to let the story speak for itself and to concentrate on the music, which is an appealing combination of rock and classical, with a dramatic bent.

Richard Burton as the narrator gives the disk a lot of its strength. Burton often overacted, but in this case his performance is nicely subdued.  He doesn't sing, but he draws the images -- probably directly from the novel -- with a keen sense of drama. Maybe since he was only  a voice, he found it easier to hit the right notes to hold the story together.

Justin Haywood of the Moody Blues sings a couple of the songs. One, "Forever Autumn," was a minor hit, but -- though an excellent song on its own -- it's a bit out of place in the story, a love song in the middle of the carnage of the invasion.

The rest of the singers are all fine, taking various characters from the novel and telling their story.

The album was a major success in the UK, but barely charted in the US, where it was poorly promoted.  CBS records had no idea what to do with it, and never seemed able to capitalize on any potential.

Wayne went back to producing, not coming out with another album of music for almost 15 years.  That record, Spartacus, was in the same vein, but nowhere near as good. There have also been attempts to turn it into a stage show -- so far, unsuccessful.

You can listen to it online at the War of the Worlds Website (click on "Click here for music player").  It holds up very well and is rock opera at its best.

The stage show has actually been successfully doing the rounds here in the UK for the past few years, attracting not only large audiences, but also some quite well known performers, including Justin Haywood, Russel Watson and Jason Donovan.

The stage show includes several specially created live action and CG scenes that are projected onto the backdrop and move the story on to the next live part of the show. There's also a "holographic" head of Richard Burton suspended over the stage that acts as the narrator, and a LARGE Martian war machine also appears on the stage as well.

Some of the tracks were remixed for the anniversary CD but I've yet to find anyone who actually likes them!

You're right. I can only assume a "senior moment" (and, maybe, the fact that the original article got it wrong as well . . . ?) on my part - and that was nearly nine years ago!