I grew up loving superheroes.  I was also a big fan of sat 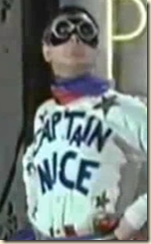 ire and spoofs (probably, like most people my age, from reading Mad Magazine). So the combination was like catnip to a cat.  And when NBC announced they were doing a superhero spoof at a midseason replacement, I was there.

The show was created by Buck Henry.  Henry had just created Get Smart and wanted to do a superhero spoof much like the other show was a spy spoof. The result was Captain Nice.

Carter Nash (William Daniels) was a police chemist* who developed developed a serum that gave him superpowers. He took on the identity of Captain Nice and started fighting crime.  His mother (Alice Ghostley) was the only one who knew is identity and sewed him a costume.  Sgt. Candy Kane was his girlfriend, who kept getting in trouble and had to be rescued.

The show was just irreverent enough to make it work both as spoof and superhero. Carter was never as dumb as Maxwell Smart, but often had problems trying to live up to the superhero lifestyle. Here's a look at the first few minutes of the first episode.

William Daniels, whose been working regularly on TV and movies ever since, brought quite a bit of sincerity that grounded the concept. And Alice Ghostley was a busy character actor in the 60s, best known as Aunt Esmerelda in Bewitched.  Ann Prentiss (Paula's younger sister) also brought fun to her role.

There was even a novelization by the great William Johnston.

Alas, the show didn't catch on.  It wasn't quite as good as Get Smart, but what hurt it the most was the fact that CBS decided to premier a very similar show, Mr. Terrific, the same night. If there were only one, it's possible Captain Nice would have survived.  As it is, the two shows become a more obscure version of the Addams Family/Munsters debate.

William Daniels, of course, is still working today, and went on to some fame in St. Elsewhere and Boy Meets World (I saw him on Broadway playing John Adams -- the lead -- in 1776). Ghostley kept busy as a character comedienne, and Ann kept working.

They used to say satire was what closes on Saturday, and this definitely fit the bill. It's too bad, since the show had some great potential.