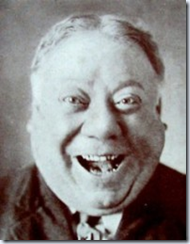 Nearly everything that was great in the silent film era has been forgotten. There are a few exceptions, but a combination of neglect once sound came in and a lack of interest today in silent and even black and white movies, means that the biggest stars of the time are known only to film scholars.  Silent comedians fare much better than any other, as long as they’re named Chaplin or Keaton.*  But before Charlie Chaplin revolutionized film comedy, the biggest names in comedy in US films** were John Bunny and Flora Finch.

Bunny was born in New York city and gravitated to the theater.  By 1900, he was appearing on Broadway, and when the new medium of film came along, Bunny jumped in.  His first film, Cohen’s Dream, was released in 1909 and he continued to star in comedy short subjects until his death.

Bunny was fat, and used his physique to great advantage.  He usually played a lower class guy who is only interested in getting away from his wife and drinking, gambling and having fun.

His wife was usually played by Flora Finch.  Finch was a thin, sour faced women with a prominent nose that made her resemble the bird she was named for.  She was from a British theatrical family and her career paralleled Bunny – reaching Broadway a few years later. Around 1910, she was cast as Bunny’s wife, and the first successful film comedy team was born.

Their films usually followed a pattern.  Bunny would go out to enjoy himself, but would have to deal with the suspicions of his wife.  Finch was a convincing battleaxe, and the perfect foil for Bunny.  Their

By 1915, they were the most popular film comedians, neck and neck with Charlie Chaplin.  But the films ended with Bunny’s death.***  Finch continued to act into the talky days, but by the end of her career was mostly appearing in walk-on roles.

By that time, they had been forgotten.  Chaplin has revolutionized comedy, moving it from a handful of laughs a reel to a handful of laughs a minute.  Films like A Cure for Pokeritis seem too slow paced, and the jokes are not as funny as what we now expect.  Like all silents that didn’t have defenders, most of the Bunny/Finch movies had become lost.****

**Max Linder was the biggest in Europe.

****They also gave a start to a comedian who is far better known today, though was never as successful as Bunny during his lifetime.  Moe Howard wheedled his way into the films in various small roles.  It’s hard to determine which ones, since cast lists were never very complete in those days, and most of Bunny’s films have been lost.  But unlike Milton Berle’s claim that he was in Tillie’s Punctured Romance with Chaplin, Howard’s claim is not disputed, since he did work at the studio where Bunny and Finch were making their films.

Posted by Chuck Rothman at 6:44 PM

It'd be interesting to see if any production stills exist of Bunny and Moe Howard on the set. Unfortunately, even the ones still in existence of either Bunny and Finch are few and far between.