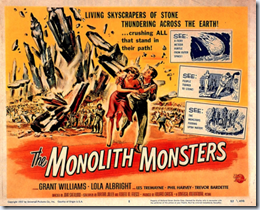 I always liked 50s monster movies, and even today the best hold up pretty well.  Oh, the science is often silly, but once granted the premise, it sticks it with logical solutions and results.  The monster are very similar though:  usually some sort of giant creature that runs amok.  Certainly the most imaginative threat in these shows up in The Monolith Monsters.*

It starts with a meteorite crashing into the desert near a small California town.  Geologist Ben Gilbert (Phil Harvey) finds one of hundreds of black rocks and takes it back for study.  When water falls onto one of the rocks, it starts to bubble.

The next day, Dave Miller (Grant Williams) returns from a business trip to find Ben, his body turned into rock.  Meanwhile, the schoolteacher Cathy Barrett (Lola Albright) takes her class on a field trip, where her kids find more of the rocks, and Ginny Simpson (Linda Scheley) take it home. Cathy recognizes the rock in the lab as the same one that Ginny took with her, and they rush to her house, only to find it destroyed and Ginny slowly turning to stone.

The black rock turns out to be a crystal that grows when exposed to water.  After a rainstorm, the monoliths begin to move:  they grow to immense height, then topple over, breaking into thousands of  pieces that grow when exposed to water, and repeating the cycle.  And they cannot be stopped.

The movie isn't perfect.  The biggest flaw is that to increase suspense the characters are slow on the uptake:  trying to find what causes the monoliths to move, they take forever to realize its water. 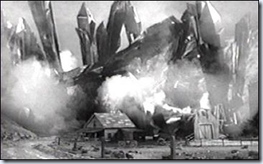 But the monoliths are the stars of the film.  They are a different type of threat:  mindless, moving only the way gravity takes them, and totally dangerous.  The shots of them growing and crashing, destroying anything in their path are impressive.

The story was credited to 50s movie great Jack Arnold, who I've discussed before.  You can see similarities to other of his films, most notably the desert locale and the attempt to make the pseudoscience believable.

The film didn't make much of a splash when it came out, released as part of a double feature and disappearing.  It's fallen into public domain and can be found in the Internet Archive.

Despite the fact that a sequel would be natural, the monolith monsters never showed up again.**  It's still one of the top examples of the subgenre.

**Other than a cameo appearance in 2001: A Space Odyssey

Posted by Chuck Rothman at 2:50 PM

I'm not sure I've ever seen this movie, which is pretty remarkable given that my monster-moving-watching childhood was in the 60s. Thanks for the pointer; I'll see if I can find it online somewhere.