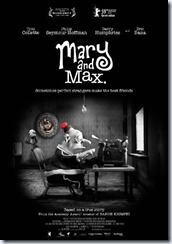 In the US, animated films are for kids.  Though there are often elements to entertain adults, that’s not their main audience, and the assumption is that it’s best to stick with children’s stories.  In other countries, though animation for adults is accepted and even celebrated. And there are few films more worthy of celebration than Mary and Max. 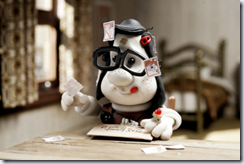 The film starts in a small dreary brown town in Australia, where Mary Daisy Dunkle (Bethany Whitmore) lives a dreary brown life.  She is an outcast, of course, teased because of a birthmark on her forehead “the color of poo.”  Her father is in a dull job at a tea bag factory and disappears each night to do his taxidermy; his mother is a shoplifter who takes a little too much sherry (well, a lot too much). One day, Mary finds a New York City phone book, and wondering about Americans, picks a name at random and sends a letter. 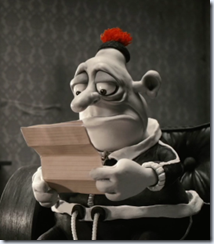 It reaches Max Horowitz (Philip Seymour Hoffman), a fat 44-year-old Jewish atheist, who lives alone and can’t deal with other people.  The letter frightens him, but he eventually writes back when he sees that they both love chocolate and The Noblets, a cartoon show.  Letter follows letter and the two create a long distance friendship over the years.  But all is not well. One of Mary’s letter, asking if he’s “done sexy,” gives Max an acute anxiety attack, and he’s hospitalized for eight months and diagnosed with a newly categorized disease:  Arnsparger’s syndrome.

Mary grows up (Toni Colette) and marries the boy next door (Eric Bana), but all is not well both between them and especially between her and Max.

The ending is extremely poignant, but I won’t spoil it here.

The movie is certainly dealing with dark themes:  depression, Arnsparger’s, loneliness, death, and even suicide.  But it’s also extremely funny.  Max’s letters have a wonderful deadpan black humor.  Mary’s are filled with the misunderstanding that a young child trying to figure out the world.

The story is narrated by Barry Humphries, best known in the states as Dame Edna Everege.  It’s also dry and funny and anchors the story.  Hoffman, unrecognizable in a New York accent, shows why he was so highly regarded as an actor.

The design is also wonderful.  First of all, it’s all made with the most painstaking of animation techniques, stop action.  All the scenes in Australia are done in sepia tones, while New York is black and white.*  Other than a few dashes of red, there are no other colors in the film which gives it a unique look.

The film opened the Sundance Film Festival – the first animated film to do so – but never got a US distributor.  I would think that was because of some of the dark elements and the fact that the story is really one for adults, not children.

It’s available on Netflix.  Watch it and get a real treat.

Posted by Chuck Rothman at 9:17 PM

Arnsparger's? I think you mean Asperger's.