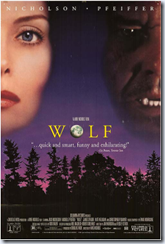 Of the classic movie monsters, the werewolf is probably the worst served. The problem is the setup:  the man/animal dichotomy is great, but it only happens in a full moon, unlike, say Cat People.  Wolf succeeds nicely because it moves away from the literal man/wolf but also uses it as a metaphor.

Will Randall (Jack Nicholson) is an editor of a publishing house* who is bitten by a wolf after hitting it in his car.  But that’s the least of his worries.  The business has been bought out by Raymond Alden (Christopher Plummer), who ruthlessly starts making changes to make it more profitable,** including demoting Will and replacing him with Stewart Swinton (James Spader).  Angry, Will is further enraged when he picks up Stewart’s scent on his wife’s (Kate Nelligan) clothing, knowing she is having an affair with him.  He goes to confront Stewart, and ends up biting him.  Will becomes more and more wolflike, being helped out by Adler’s daughter,  Laura (Michelle Pfeiffer).

But the change also helps out Will, who starts being more cutthroat and aggressive, winning his job back and getting Stewart fired.***  But being a wolf also has its drawbacks, especially when there’s another one around.

This is the type of role in which Nicholson excels:  over-the-top but not entirely crazy, and he plays it well.  He had been wanting to make a movie of the script for years, since Jim Harrison was a friend of his. Nicholson’s background in horror also serves him well.

Spader, of course, makes a creepy bad guy, and Pfeiffer was good as usual.

The movie got mixed reviews, mostly because it’s a mixed movie.  It tries to be arty, which turned off the horror movie crowd, and a horror film, which didn’t appeal to the arty crowd.  It also plays with the tropes of the werewolves in unexpected way.

Despite its flaws, the movie overall is something to check out.

**Since I have some knowledge of the publishing business, I can say that this is harder to believe than believing in werewolves.  Book publishing even in 1994 was not that lucrative.

***Leading to this memorable scene:

Posted by Chuck Rothman at 3:16 PM