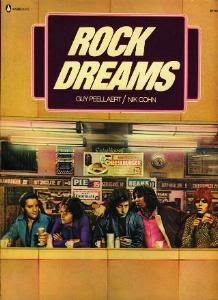 Guy Peelaert was a Belgian artist who began selling his work in the 60s, and who was very attuned to the rock and roll scene of the time.  Based in Paris, he had a couple of successful comic strips, and in 1974, he produced Rock Dreams, a fascinating set of images of the rock and roll world.

The book was a series of painting, representing rock music from its roots to the time of publication. It showed the important artists of the genre – but rarely doing anything that related to their career or even to reality.  The images were all visually striking and portrayed the myths of rock more than its reality.

And it was fascinating.  Stars were shown in situations that they probably had never been in, and yet they fit perfectly into their images, no matter how weird.  So you had the Rolling Stones dressed in black leather drag; the Beatles having tea with the Queen; Brian Wilson looking chubby and lonely in a cluttered room, picking out a tune on a piano; Otis Redding sitting on a dock; the Mothers of Invention as a motorcycle gang.

Here are some examples: 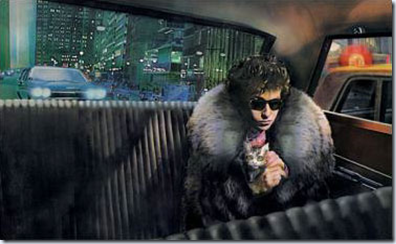 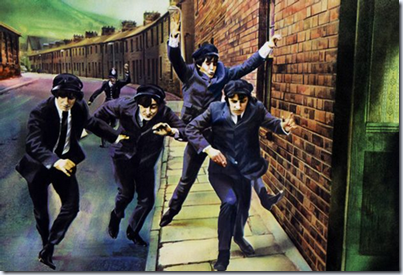 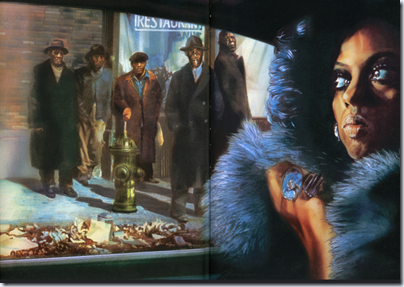 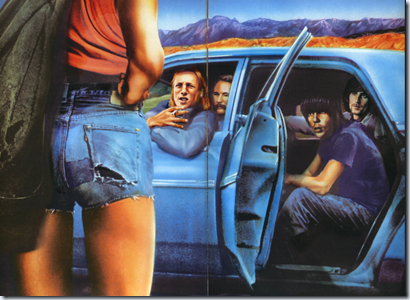 The photos were accompanied by text by rock critic Nik Cohn, which was also evocative, but it was the art the caught everyone’s attention.  The book was a major best seller  and put Peellaert on the map.

As should be obvious, he started doing album covers, most notably It’s Only Rock and Roll by the Rolling Stones and David Bowie’s Diamond Dogs.  He also worked in movie posters and many other things until his death in 2008.