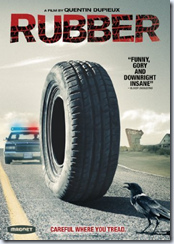 I’m not a fan of modern film horror.* I find it more annoying than frightening, more formulaic than clever.  I think it was the strangeness of the premise that attracted me to Rubber, a horror film that turns out to be a metafiction about horror.

It starts with a group of people out in the deserted, being told by a policeman, Lieutenant Chad (Stephen Spinella) that they are about to watch a movie, one whose events have no reason.  The group take binoculars and starts watching.

And see a tire (Robert) comes to life.  We see it stand upright and start rolling through the desert, but it soon begins to crush things in its path. When it can’t crush something, it starts to vibrate and the object or person explodes.

The tire find Sheila (Roxane Mesquida) and is thwarted when it tries to blow her up and then stalks her into a run-down motel.  Meanwhile, the audience discovers that they are not just observers of the events…

It was the goofiness of the concept that drew me in. The idea of a sentient killer tire is too delightful to pass up, and the scenes featuring Robert are all nice combinations of funny and scary.  It also has a lot to say about horror films and their audiences.

*Though he reportedly has a cameo in one of the Fast and Furious films.

Posted by Chuck Rothman at 7:00 PM