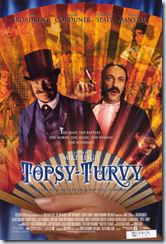 Mike Leigh is an extremely well regarded British film director, known for serious dramatic films where his actors collaborate by improvising their lines in rehearsals until things click.  However, sometimes he lets things go and have fun, and the result was Topsy Turvey.

The story is simple.  After their play Princess Ida is a flop, composer Arthur Sullivan (Allan Corduner) and playwright W. S. Gilbert (Jim Broadbent) try to create a new operetta.  But there are issues.  Gilbert wants to use a magic potion as a plot point, but Sullivan, exasperated, points out he has used various magic plot points before and refuses to write music unless the story avoided pure fantasy.  While deadlocked, Gilbert attends an exhibition of Japanese arts and buys a katana.  When the sword falls off the wall of his study, Gilbert is inspired to write The Mikado.*

The rest of the movie shows their work on putting together the play.  It follows rehearsals, backstage maneuvering, and adding and cutting songs. One scene has the group protest the cut of a song that Gilbert didn’t think was worth keeping.  It was “A more humane Mikado” (“My object all sublime/I shall achieve in time/To let the punishment fit the crime/The punishment fit the crime”), one of the highlights of the show even today.**

This may be the best representation of how a play is created, and it’s full of memorable characters, including the always good Broadbent and many others.  It’s a sumptuous looking film, with great scenes of Victorian dress and design, and is also filled with vignettes of life at the time.

The film is a delight from start to finish, not the least because it becomes a “Greatest Hits” version of Gilbert and Sullivan’s score, a perfect place to get a feel for their genius.

**I saw Itzhak Perlman perform it once at his summer camp; it was delightful.

Posted by Chuck Rothman at 9:21 PM