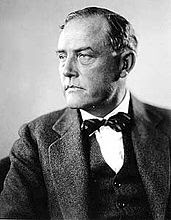 I could do this entire blog on great but forgotten silent films. All but the very greatest have been forgotten (and often lost) and audiences these days don't seem to have much interest in them. The lack of sound, plus the acting style, just put people off.*  But silent films hold up well, if you're willing to put in the effort.

Silent filmmakers were  far more international that films today.  It was fairly easy to shoot new intertitles for a silent film, and the audience didn't have to watch action on the screen while reading the subtitles.  That led to strong film industries in Europe, especially in Germany and Sweden.  And the greatest Swedish film director of the era was probably Victor Sjöström.

He grew up in Sweden and Brooklyn, NY, and broke into films as an actor and director around 1912, after a establishing a career in the theater in both areas.  Sjöström developed his craft and soon began making films with a psychological depth that was unusual for his time.  Around the time he had mastered filmmaking, he started adapting screenplays of books by Swedish Nobel Prize winner Selma Lagerlöf.  Lagerlöf distrusted what filmmakers might do to her work, but Sjöström seemed to find the formula to make both her and the audiences happy.  It was part of this series when, in 1921, he adapted her novel Thy Soul Shall Bear Witness! (Körkarlen) as The Phantom Carriage.

In it, Sjöström starred as a man doomed to drive the carriage the took the souls of the dead to heaven. The film's effects involved some very good double exposures, and were quite advanced for the time.**  Its dark mood seemed to strike a chord in the post-World-War-I world.   It was probably the masterpiece of the silent Swedish cinema.

It raised enough notice for Hollywood to beckon and, in 1924, he went to work for MGM.  Using the name of Victor Seastrom,*** he eventually hooked up with Lon Chaney for another great film, He Who Gets Slapped.  Chaney starred as a circus clown, who was crying not only on in the inside, but on the outside as well.  His act consisted of having people slap him and knock him down.  He (the clown's name) has, of course, been betrayed in the past, and in the course of the film he gains some happiness.  It's a dark film, and Cheney is, as usual, riveting.

Sjöström was on a roll and when a few years later, Lillian Gish wanted to make a movie of The Scarlett Letter,**** she asked for Sjöström, feeling his dark attitude was just what the film needed.  She was right.  The film is an excellent adaptation and Gish was perfect as Hester.

Evidently, they liked the experience, because two years later, Gish insisted she and Sjöström reteam to make  The Wind, his masterpiece.

The Wind in an intense film of loneliness and madness.  Gish is a young woman who moves to the West Texas to live with relatives.  But there is tension between her and her cousin's wife and she is forced to leave.  With no place to go, she agrees to marry their neighbor, even though she finds him repulsive.  But she soon finds out that the constant wind is even worse and slowly begins to go insane.

The film is a claustrophobic look at the difficulty of living on the frontier.  Gish is magnificent and Sjöström captures her feeling of helplessness in the face of relentless force.

Alas, the silent era was ending.  The Wind was one of the last silent films MGM released; they moved quickly into talkies.

But Sjöström did not.  He didn't like the restrictions the new sound equipment put on what he could do. He did the talkie A Lady to Love in 1930, then moved back to Sweden for three more films, after which he returned to the theater, acting and directing there.

He also acted occasionally in films.  In 1950, Ingmar Bergman, who had loved The Phantom Carriage so much that he watched it every year, cast him in his film To Joy.  But Bergman saved his best role for Sjöström in 1957, when he cast him in the lead of Wild Strawberries, a movie that was filled with homages to The Phantom Carriage.

Sjöström died in 1960, known for the Bergman film, but forgotten as one of the pioneers of the silent film.  Anyone who loves the medium needs to seek him out.

* I'm appalled at comments about how actors in other film eras are called "bad," simply because their style is different than what people are used to.  Our current acting styles may look just as foolish to people in another 90 year, but they're treated as though that's the only way of acting.

**It may have been the source of the standard movie image of the see-through ghost.

***I guess Americans didn't like umlauts.  This was before heavy metal music, of course.

****Over studio objections, who didn't want to make a movie about an unwed mother.  Gish argued the book was an American classic and taught in the schools, so there was no point to shying away from it.

Posted by Chuck Rothman at 9:45 PM

Thanks,
I beg to differ that Victor Sjostrom is forgotten; we are studying him in on online course from the University of Copenhagen. But to be honest with you, as a writer, I like your use of the word "beckon"