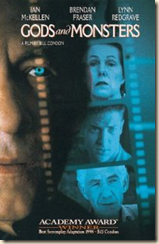 Some actors make good movies.  Some actors make stinkers.  Brendan Fraser manages to do both.  Frasier has made such flops and mindless entertainment as George of the Jungle, Dudley Do-Right, Bedazzled, Monkeybone, Looney Tunes: Back in Action, Journey to the Center of the Earth, G.I. Joe: The Rise of Cobra, and Furry Vengeance.  But he's also appeared in Crash*, The Ugly American, and Gods and Monsters.

Bill Condon's film tells the story of the last day of filmmaker James Whale.  Though known primarily only to film buffs today, Whale directed the landmark Boris Karloff Frankenstein, and well as its sequel  The Bride of Frankenstein, one of cinema's enduring classics.  He was a major director of the 1930s (also directing Show Boat).  But after the mid-1940s, he retired from filmmaking.

Whale's personal life would have been the stuff of scandal.  He was a homosexual, and never tried to hide the fact.  But fan magazines and gossip columnists of the time didn't make much ado about this.

The movie is set just after the Korean War.  Whale (Ian McKellan) is living alone with his housekeeper Hanna (Lynn Redgrave), weak after a series of strokes.  He is feeling lonely and depressed and hallucinates about the shooting of The Bride.

Into this life comes Clayton Boon (Fraser), an ex-marine who he hires as a gardener.  Whale and Boon become friends, seeing Bride of Frankenstein together and going to Hollywood parties.  But Whale has something else in mind for Boon.

This is Fraser at his best.  He plays a big lug, but not a fool. He portrays the complications of the relationship very well.  It is so different from the type of films he's famous for that you might even think it's another actor.

Ian McKellan proves once more why he is one of films greatest actors. It's really his film, and he manages to draw out the complexity of Whale's emotions in a brilliant fashion.

Box office was modest,** but the film was shot on such a shoestring budget that it was a small financial success.  The film even got three Oscar nominations -- two for McKellan and Redgrave, and a win for Condon's screenplay.

Condon's next film, Kinsey, got good reviews but weak box office and his career stalled a bit, but he seems to have revived it with Dreamgirls.  Fraser has become a major action star in mindless popcorn films.  It's been good for his bank account, but hopefully he will try again to do more serious projects more worthy of his talent.

*I'm saving asterisks by putting my comments on this list in one footnote:

**Fraser's Monkeybone did better at the box office, and it was considered a massive flop.  Of course, it also cost 25 times as much.

Posted by Chuck Rothman at 4:59 PM

Gods and Monsters is one of the few movies in this past decade that I can honestly say I enjoyed. The scene where they take the picture of Whale (McKellan), Boris Karloff (Jack Betts) and Elsa Lanchester (Rosalind Ayres) at the party is a thing of beauty.

I, too, don't understand the animosity directed towards Crash. Whether or not it was Best Picture-worthy may be a topic for discussion (I've only seem one of the other contenders, Good Night, and Good Luck--and my lifelong idolatry for Edward R. Murrow probably clouds my admiration for the film) but I certainly think the movie is first-rate.